‘I panicked!’: Cornered Chisholm Avenue police evader says chase was out of character 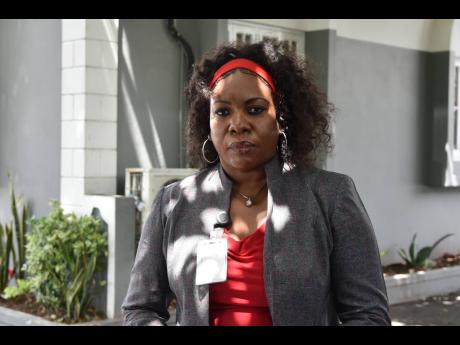 Kenyon Hemans/Photographer
Nicole Williams: “I needed someone to talk to. ... It was a spur of the moment.”

If Nicole Williams could turn back the hands of time, she said she would not have engaged in daredevil driving that sparked a police chase across the Corporate Area last month which was captured in a viral video. Faced with humiliation and an...

If Nicole Williams could turn back the hands of time, she said she would not have engaged in daredevil driving that sparked a police chase across the Corporate Area last month which was captured in a viral video.

Faced with humiliation and an ongoing judicial process, the mother of two girls is still trying to wrap her mind around the April 30 life-changing experience.

“I’m not here to be a victim because I know what I did. I accept what I did,” Williams said in a Gleaner interview outside the Kingston Traffic Court on Tuesday.

“Honestly. I don’t know what happened that day. I really don’t know. If that day would come back, it would not happen.”

Successive deaths in her family, including of the father of her child; and her sister who has left behind six kids, have shattered the world of the self-proclaimed calm and collected warehouse manager.

“From April 30 until now, it has been a lot. A lot of discrimination … . I’ve never got myself in any trouble of this magnitude,” Williams said.

Williams remembers being sick and leaving work to run an errand before she eventually became the unwitting antagonist in a movie-like script that drew public outrage.

She was cornered at a plaza at the intersection of Chisholm and Maxfield avenues before giving in to the demands of officers to exit the vehicle as bystanders gathered.

Tensions escalated and footage appeared to show her reversing and damaging a police service vehicle during a hot-tempered stand-off.

The series of events began, she told The Gleaner, when she was stopped by a policeman after making a lane violation while heading to York Pharmacy in Half-Way Tree.

“I stopped, wound down my window, and said to him, ‘Oh, boy, Officer, weh mi do now?” Williams said.

Williams disclosed that she was informed of the violation but drove off when the cop, she said, walked away. She claimed she thought he was not coming back.

She said she proceeded to the intersection of Hagley Park Road and Maxfield Avenue and slammed on the gas as she saw the cop car’s flashing lights behind her.

“Honestly, I panicked, and that is when I started to drive,” Williams said.

The alleged traffic offender said persons who know her well are still wondering what got over her that Saturday.

She recalls crying and asking her employers for counselling the day before the incident. Her bosses have been supportive since the incident, she said.

“I needed someone to talk to. Too many things have been happening and it’s just a pity what happened to me ... . It was a spur of the moment,” Williams remarked.

The incident, she said, has caused grave anxiety and personal embarrassment, causing her to withdraw from social media and the public domain.

She said she has also received death threats.

“My address, full name was sent out to the media. I was in fear for my life because of some of the threats that were going around on social media,” she said.

Her stepfather, who raised her since she was six years old, told The Gleaner that Williams’ antics as captured on video were out of character.

He also took issue with her insurance company for cancelling her policy immediately.

“The police have not sent any claim to her insurance. The insurance saw it on social media. I don’t think that is right,” he said.

Williams, who has been licensed to drive since 2005, was warned by Judge Peter Wilson in court on Tuesday that the breaches could merit the suspension of her licence.

But he said certain factors would be considered before he makes his ruling.

“Why did this happen? Is this normal behaviour for this person? How has it impacted by the decision of the court?” Wilson said, listing the concerns that emerge before stripping drivers of their licence.

He told Williams that the “social-media event” contrasted with her posture of remorse on Tuesday.

“The behaviour is not you. It’s someone else … . Everybody has a day like your day, but not all days everybody has a video phone,” he said, before adjourning the matter. The judge advised Williams to go home, cry, sleep, and move on.

Judge Wilson said, however, that she would not be allowed to drive lawfully for six to 12 months.

She is to return to court on June 22 when it is expected that she will enter a guilty plea.

Williams is represented by Esther Reid.

The accused was slapped with five charges, four of which will be heard by the Traffic Court.

The offences range from dangerous driving, failure to stop at the request of a constable, disobeying a traffic signal, disobeying constable signal, and resisting arrest.