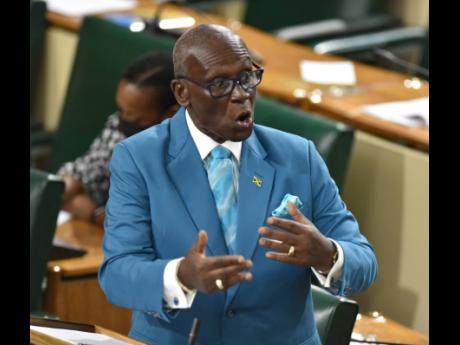 Kenyon Hemans/Photographer
Minister of Local Government and Rural Development Desmond McKenzie is animated while making his contribution to the 2022 Sectoral Debate on Wednesday.

With 44 per cent of Jamaicans residing outside of urban centres, Local Government and Rural Development Minister Desmond McKenzie says stronger focus will be placed on these areas to boost economic growth and generate more jobs.

Through the expansion of access to social and productive infrastructures such as access to running water and education, he believes that the array of social issues faced can be addressed,

One such area which will benefit from extensive development works is Chambers Pen in Hanover, with an overall project to cost some $223 million.

“We believe that the time has come to drive the policies and programmes that will unchain the people of rural Jamaica from a cycle of third-generational poverty,” McKenzie said during his Sectoral Debate presentation in Parliament on Wednesday.

“If you ever go to Chambers Pen, if you don’t have jackass to go up there, don’t go. The community [has] been neglected for years,” he said.

Chambers Pen will see the Government spending more than $100 million to fix its road network as well as some in sections of Westmoreland.

Three hundred houses in Chambers Pen will be wired at a cost of $27 million under a memorandum of understanding, which was signed by the Jamaica Social Investment Fund, with work scheduled to begin by month-end.

The Chambers Pen Primary School will also be repaired at a cost of $20 million, and another $4 million will go towards renovations to the community centre and the local basic school.

A $1-million skills-training programme will also be introduced in the community, led by the Social Development Commission.

Four two-bedroom indigent housing units will also be constructed at a cost of $28 million in short order, the minister said.

McKenzie added that a comprehensive programme will also be rolled out to meet the water needs of rural communities and combat drought.

Six municipalities across the country have so far been given new water trucks with a promise made for additional units to be procured to provide water to homes.

McKenzie reported that in 2019, some 70 per cent of Jamaicans had access to water in their homes, with an additional of 20 per cent who had to access water from standpipes.

“This is a challenge and we are determined to overcome these challenges ... . We will improve lives, sustain livelihoods, and Madam Speaker, put more vigour into communities with modern and reliable water supply,” he said.

Chambers Pen will see an upgrade in its water system as the Rural Water Supply Limited will lay 3.4 kilometres of pipes and fixtures at a cost of $30 million. This project is set to commence by June.

“Through this project, approximately 1,500 residents in 300 households ... will benefit from water supply from 52-million gallons of fresh water every day,” McKenzie said.

In a wider focus, the local government ministry will put together a priority list to rehabilitate high-traffic urban centres in all parishes, roads in large residential areas, roads leading to essential services, and areas of social and economic importance at a cost of more than $370 million for the 2022-2023 financial year.

“We have to see value for the taxpayer dollar, not just value alone, but we want to see quality of work being done,” McKenzie said.