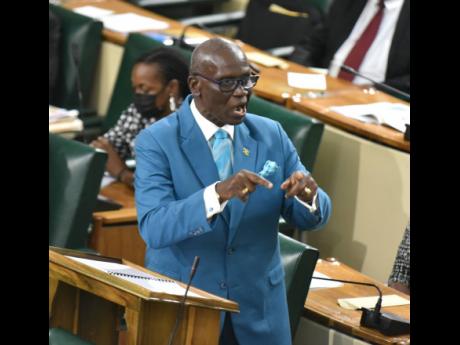 Minister of Local Government and Rural Development Desmond McKenzie has signalled that persons who believe that dumping garbage in the nation’s drains and gullies will generate more jobs will be left sorely disappointed.

“Not over my dead body. It is not going to happen,” McKenzie asserted while making his Sectoral Debate presentation in Gordon House on Wednesday.

Over the past several weeks, residents in several sections of the island, including sections of McKenzie’s own Kingston Western constituency, have been expressing outrage over a backlog of garbage in their communities as the National Solid Waste Management Authority (NSWMA) blames the situation on resource constraints.

Last month, residents of Tivoli Gardens were forced to stockpile salt as they battled a surge in the maggot population in some sections of the west Kingston community due to the pile-up of uncollected garbage.

NSWMA head Audley Gordon noted that outwears after the finance ministry approved the purchase of 100 new garbage trucks, the units were yet to be delivered to the agency.

Acknowledging the garbage collection crisis and the constraints, McKenzie commended the management and workers of the agency for their dedication.

He lashed citizens who continue to pay “lip service” rather than take personal responsibility or encourage others to dispose of their waste properly, noting that this was the first step to a clean environment.

“Every day you beat up on [NSWMA], saying they not doing the job. Madam Speaker, if this Government provide a garbage truck for every community in Jamaica, it will not change. The minds of the people will have to change first,” he argued.

“You not going to stick up this Government because of nastiness … . This Government has done everything in its power to provide trucks ... . As a country, we need to have some civic pride,” he said, noting that Jamaicans should “dispose of garbage in the way that it ought to be done”.

McKenzie also expressed concern about the practice by developers to place piles of sand and gravel on sidewalks and roadways, obstructing pedestrians and motorists, as they carry out construction work.

“I am using the floor of the Parliament to say that I want Jamaica to join us in returning public order back to our streets. We need to get back, Madam Speaker, and we are committed to work with the PSOJ,” he said, referencing the Private Sector Organisation of Jamaica, whose head, Keith Duncan, the minister said he had a productive meeting with this week.

He noted that while the Government welcomes developments taking place across the country, they should be carried out in an orderly manner.

McKenzie has been tasked to head an interministerial team – including Agriculture and Fisheries Minister Pearnel Charles Jr; Floyd Green, minister without portfolio in the Office of the Prime Minister; and Matthew Samuda and Everald Warmington, ministers without portfolio in the Ministry of Economic Growth and Job Creation – which will develop and roll out a national clean-up programme shortly.