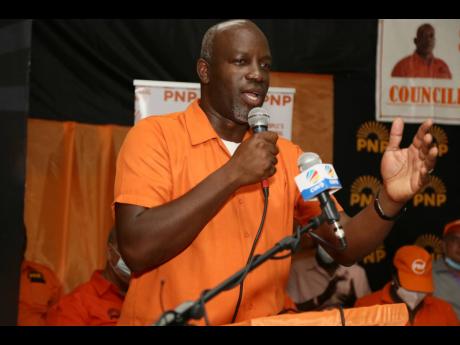 Nathaniel Stewart/Photographer
Scean Barnswell, councillor for the Hayes Division in Clarendon, addressing Comrades at the People’s National Party’s Spaldings Divisional Conference at the Sanguinetti Primary School in the mid-island parish on Thursday night.

Former May Pen Mayor Scean Barnswell has criticised the Government for not extending COVID-19 restrictions when the orders under the Disaster Risk Management Act (DRMA) expired a few weeks ago, citing this as the reason for the current fifth wave of the pandemic in the island.

Speaking on Thursday at the Spaldings divisional conference of the People’s National Party at the Sanguinetti Primary School in Clarendon North Western, Barnswell, the councillor for the Hayes Division, said that the Government disregard the advice of health experts in lifting the restrictions.

After two years of daily curfews and a ban on entertainment and large events, the Government began easing the restrictions in March as infection numbers and hospitalisations declined drastically, citing the mental toll the measures were having on the population and the effects on the economy. The mask mandate and testing requirements for travellers coming into the island were lifted in April.

On Thursday, Barnswell charged that the Government had made a mockery of the DRMA.

“We have an act called the ODPEM Act, and in that act, it speaks about all kinds of disasters, which include this pandemic, and what the Government did was to sideline the ODPEM Act and take charge of the situation and they make a mockery and a mess of it,” Barnswell said, saying that ODPEM – the Office of Disaster Preparedness and Emergency Management, the state’s chief disaster-response agency – was sidelined.

“Just the same way when we have hurricane season, ODPEM would come out and do the training and the sensitisation and [give] guidelines as it relates to the different hurricanes that we should expect during the hurricane season, they have the capacity to say to the people with this pandemic, this is what we need to do, but the Government sidelined ODPEM. Not only ODPEM, they also sidelined the medical experts. They are not listening to the technical advisers and that is why we’re now seeing a fifth wave of this pandemic,” he said.

He also poured scorn on the Holness administration for the hefty fines imposed on many Jamaicans for breaches of orders under the DRMA.

“I hear a lady from in my neck of the woods in South East Clarendon say the court charge her over $700,000 because she was at a party. I hear a young man said [he was charged] $300,000, and some whole heap of money being charged to these people who are not even employed, so what they (the Government) have done is oppress the poor people of this country,” Barnswell said, adding that the poor were unfairly targeted and treated in terms of breaches.

“I see some people in a some hotel a drink fine wine and having caviar, while you can’t go to the corner shop to buy a pound of flour and the next night’s dinner and next day’s breakfast because them say is the corner shop a spread the virus, but yet their friends can be at Moca Fest having big party – sell of ‘til it can’t hold nobody – and let us not forget that party was a Government-endorsed event,” he said, referencing an event staged at Rick’s Café in Negril a year ago sparking much controversy.

Barnswell told Comrades that there was hope for Jamaica in the leadership of Opposition Leader and PNP President Mark Golding.

“We’re just waiting on the time, and waiting on the hour, ‘cause any time them announce it (next general election,) we shall ensure that Mark Golding will be the next prime minister of Jamaica,” he said.

“We will increase the numbers we have in Gordon House, and Comrade Mark Jefferson Golding will be on his way, leading this country back to glory, and continue the progress of P.J. Patterson, [and] Portia Simpson Miller, and what Comrade Peter Phillips had wanted to do,” Barnswell said, referencing Golding’s immediate predecessors.