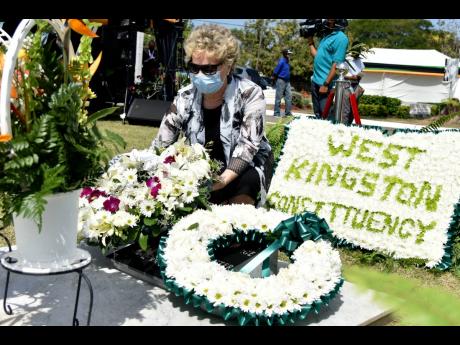 Kenyon Hemans
Carla Seaga laying a wreath on her husband’s grave yesterday at the National Heroes Circle in Kingston. Former Prime Minister Edward Seaga died on his birthday on May 28, 2019. 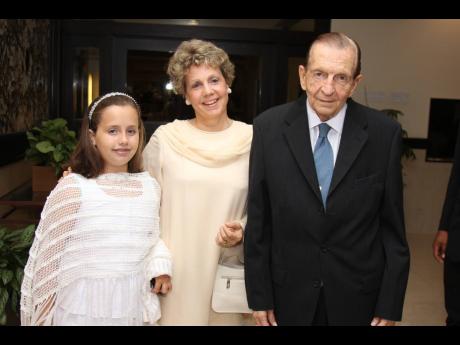 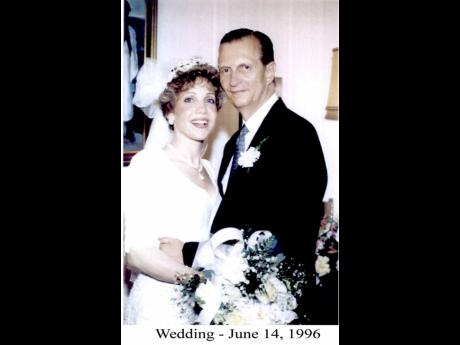 File
Edward and Carla Seaga on their wedding day on June 14, 1996 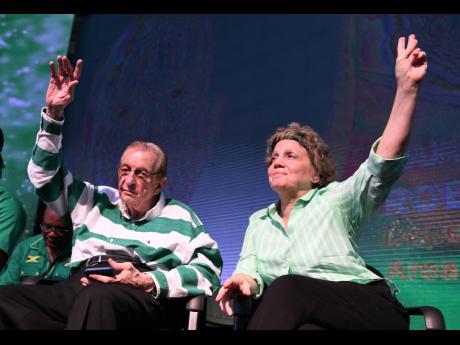 File
Carla Seaga by her husband Edward’s side at the Jamaica Labour Party’s 75th anniversary conference. Edward Seaga was a former prime minister of Jamaica and leader of the JLP.
1
2
3
4

One word describes the whole being that is Carla Seaga, and it’s loyalty.

It’s a characteristic her late husband and former Prime Minister Edward Seaga revered in his public and personal life.

Three years after his passing on May 28, 2019, she has given The Sunday Gleaner a behind-the-scenes snapshot of their union, the daughter they shared and her life since saying goodbye to her beloved Edward.

So close were they that she found it difficult to speak about herself without mentioning the man who politics continues to define and redefine even in death. She has become the custodian of his legacy, having had a front-row seat in 23 years of marriage and working closely with him for years prior.

Mrs Seaga said she retreated from public life to grieve and mourn, but also taking time for their daughter, Gabrielle.

They remember him, especially through music as Mr Seaga was a connoisseur of almost every genre of Jamaican music, especially ska. He also loved the opera and would give a deep belly laugh at a good joke.

“... While I was invited to focus on myself, I have not fully done so here. I chose instead to use this opportunity to also recall aspects of my husband’s legacy, especially at this time,” Mrs Seaga said last week in written responses to The Sunday Gleaner.

“When my husband died, this was a major turning point for me. At first, I found that I had to remove myself from any major social gatherings because I needed time to come to terms with this loss. I also wanted to make time for Gabrielle, as she was only 16 when her father passed away,” she said.

“Now 19, Gabrielle often recalls special memories of her father and she talks about missing him. We both miss him. In this regard, we have relied on our faith to take us through this journey. Faith is central to both of us in terms of who we are and how we cope with everyday life,” said the woman who could never be considered political and who did not crave the limelight, though it came with marriage.

Although seen as stoic by some, Carla Seaga painted a different picture of her late husband, who she recalls as an excellent storyteller who took pleasure in good conversation.

“We miss the conversation and the things her dad taught us both. Not many people would believe this, but he had a sense of humour and could enjoy telling a funny story and having a belly laugh when he heard one,” she explained.

“I mention his sense of humour because most people will tell you that when they first met him, they found him to be an extremely stark and serious individual; someone with no personality – and possibly one you should fear. I, like most, was no exception, and found him almost fearsome. Over time, I came to understand this serious demeanour. I worked on many government projects and, after a while, realised that this stark personality was actually based on his concern for the progress and development of Jamaica,” Mrs Seaga reflected.

“During my marriage, I enjoyed engaging with him on current affairs and listening to his analyses. I often recall the music he shared with us on weekends – a very wide range from ska to opera. Gabby also enjoyed these sessions and spending time with him in museums. She has also developed her father’s passion for history,” she said of their daughter.

Carla Seaga describes herself as a lifelong learner, who remains engaged in her occupation. Recently, she decided to learn something new and has just completed an online certificate course in technical writing.

With a master’s in public administration and a first degree in sociology, her education and interests have led to her involvement in a number of projects and positions, including founding and serving as chairman of the Social Support Fund, which focused on assisting victims of violence, especially those with limited resources. She has also served as chairman of the Devon House Development Company Limited and co-owned a retail company for many years which had Jamaican-made crafts and gifts as its focus. She, too, is a lover of Things Jamaican, a once-thriving Jamaican-brand business.

Mrs Seaga also became certified and is currently in real estate sales as a spin-off of her family’s business years ago. She also served as a board member of the HEART programme for technical education, which was the brainchild of her late husband, as well as being part of the development of the Solidarity programme, which provided small loans to young persons with little or no access to credit.

Carla Seaga was also involved in the PACE programme for early childhood education, the LEAP programme for street children, and served on the board of the Golden Age Home for the elderly.

For the past seven and a half years, she has served as executive director of the UWI Development and Endowment Fund, a registered charitable organisation based at The University of the West Indies, Mona.

Edward Seaga was passionate about Jamaica and Mrs Seaga said that in her 23 years of marriage to him, that passion never waned.

According to her, his political career started and ended with the focus on “the haves and the have-nots” – the latter his main concern.

Acting on advice from another former Jamaica Labour Party leader, she said Mr Seaga never forgot that what Sir Alexander Bustamante once told him: “Remember the poor.”

“I found that when you are married to a person who holds a high office, public service becomes harder when you have a child. This is because you have to make time for children and public life is extremely demanding. Public service requires your undiluted time, seven days a week, and juggling your schedule is not always easy. Therefore, to be a truly effective public servant requires dedication,” she told The Sunday Gleaner.

“I believe that is why he worked tirelessly on innumerable projects, which included educational reform, affordable housing, urban and rural renewal, equal rights and justice, social welfare, and job creation. I believed in my husband’s causes and helped him with various projects, but I learned to assist him while also pursuing my own interests. It is important for women to do this and it is something I have tried to teach Gabrielle,” she explained.

While not active in the political trenches, Mrs Seaga has been a bedrock of support behind the scenes. Although she enjoys political analysis, she did not pursue high public office, believing instead in service, working on projects to better the lives of others.

While saluting those who choose public office, she believes women can contribute to society in different ways.

She enjoys out-of-town recreational trips with her daughter.

“Gabrielle grew up not seeing much of her father on Sundays, as those days were devoted to his football team. I, therefore, tried to always find time to engage her, especially on weekends,” Mrs Seaga told The Sunday Gleaner.

“I was fully aware that I was taking on a demanding role when I married my husband. I had no misconceptions about that, but I have to admit, I could have really done with a little more downtime and a few additional vacations sometimes,” she said.

Never one for controversy, she gently waded into the brouhaha over the pairing of Edward Seaga’s image with that of his political rival, Michael Manley, also a former prime minister, on the to-be-introduced $2,000 banknote.

There have been strong reactions from some members of the public and the parliamentary Opposition since the unveiling of the plan, which reportedly bypassed Manley’s adult children and the People’s National Party he previously led.

Manley’s image is on the $1,000 note currently in circulation, while Mr Seaga will be a new addition among the former prime ministers and national heroes featured on the island’s bills and coins.

“ ...I understand why there has been a strong feeling on both sides of the political fence that the two former prime ministers should not appear on the same banknote together. Minister Clarke has explained the Government’s position in great detail as to why it was not possible for them to appear on separate notes,” she said, referring to Finance Minister Nigel Clarke.

“ ... I agree with the statement made by Prime Minister [Andrew] Holness, when he remarked that my late husband deserves to have a place on a Jamaican currency note based on his well-documented list of achievements and service,” she stated.

Added Mrs Seaga: “With respect to preserving his legacy, I know that there is still much to be done, but I am also realistic. The pandemic caused much dislocation and loss. Projects of this nature require time, specific skills and resources and so could not have been adequately addressed before, but will need to be followed up on, hopefully, in the not-too-distant future,” she wrote.

As Jamaica celebrates 60 years of Independence, she pointed to the unforeseen pandemic and the global economic distress and pondered what’s possible for Jamaica’s future given the current challenges and international concerns. However, like her late husband, she has a “never-ending optimism about Jamaica”.

Her final words were also his words, taken from his autobiography: “Many feel that the Jamaican flag should be flown upside down as the accepted international signal of distress. But the design of this flag is unusual. It is the same pattern, whether it is flown upside down or [right-side] up. Maybe this is meant to convey that there will be no need to signal any lasting distress in this, our Jamaica.”

Yesterday, on the third anniversary of his death, she gave him flowers.