Grisly end to search for 77-y-o 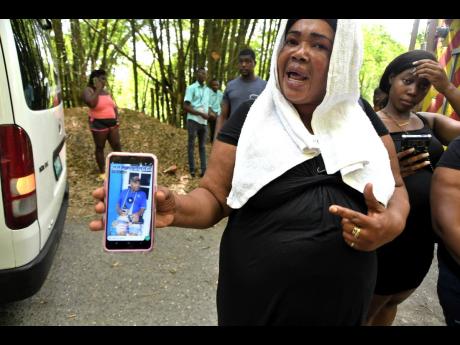 Rudolph Brown/Photographer
Lorna Lindsay, daughter of Derrick Lindsay, shows photo of her father after burnt remains believed to be those of the 77-year-old were found in Cavaliers, St Andrew, on Monday, two days after he went missing. A nephew is being sought by the police for questioning.

The search for 77-year-old Derrick ‘Reds’ Lindsay, who mysteriously vanished from his home on Saturday, ended in sorrow on Monday after burnt remains believed to be his were discovered in bushes in Cavaliers, St Andrew.

A nephew is now being sought by the police as a prime suspect in the murder.

Lorna Lindsay told The Gleaner that her father was killed at his Brooks Level, St Andrew home and his dismembered body stuffed into two suitcases and transported approximately five miles by taxi to the dumping site in the woodland.

The taxi driver, who was questioned by the police, reportedly took cops and relatives to a false location on Sunday before yesterday taking them to an area where he had dropped off the nephew with what he believed was luggage on Saturday.

She said that a carpet was removed from the flooring and is believed to have been disposed with the body.

Clothes previously stored in the two suitcases were also scattered all over a room.

There were also signs of bleached being used in an attempt to clean the bloodied room.

On Saturday, the now-suspect reportedly told relatives that he was moving out. When they say the taxi backing up into the yard, they had no idea of what had already unfolded.

“If we did just have a hint. When mi say to him, ‘You see Uncle Derrick?’, him say no,” she recalled, adding that he then said that Lindsay was sitting down nearby.

When efforts to locate Lindsay, who was last seen about 10 a.m. on Saturday, proved futile, a missing person’s report was filed with the police.

The suspect’s sister told The Gleaner that the cab driver told her that he had also told him that he was moving, so he was not suspicious of the luggage.

He had also reportedly bought $500 worth of gasolene at a gas station before he was taken to his destination.

The police believe the gas was used to set the remains afire.

Yesterday, a woman at the ghastly scene said that about 3:03 p.m. on Saturday, she had seen fire in the bushes in Cavaliers and notified the Stony Hill Fire Station, but they did not respond to the call.

According to the sister of the suspect, he had been displaying signs of mental illness for some time.

“Him have a little challenge. Something not right. Something not clicking properly … . The taxi driver is his friend, but he can’t believe [he] would charter him on such a gruesome act,” she said.

Relatives recalled that Lindsay and his nephew had recently had an argument over monies owed to the now-deceased.

“Mi see him a Golden Spring last week Friday and now him burn out,” he said while using his phone to capture images of the scene from a distance.

Shana-Lee Reid wept openly at the sight of her grandfather’s remains being placed in a bag, headed to the morgue.

“Him burn him out left nothing. Him burn him left nothing at all. A this me can’t stand, him kill him and throw him ya suh like him a one dog. Him a nuh somebody?” she said, crying.

The cops are urging the suspect, who was spotted in the Linstead area of St Catherine up to Sunday, to report to them immediately.