More plastics to be banned this year 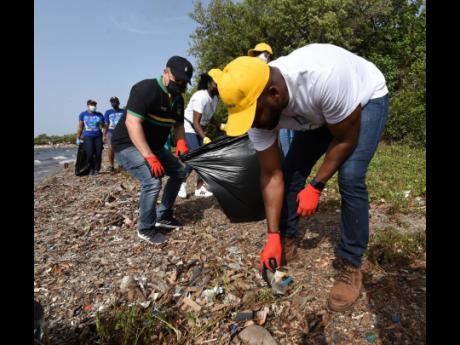 Earlier this year, Senator Matthew Samuda (left), minister without portfolio in the Ministry of Economic Growth and Job Creation, and team made a task of cleaning up the beaches of waste that is causing serious environmental pollution.

The Government of Jamaica is planning to ban additional plastic products by the end of the year. Senator Matthew Samuda, minister without portfolio in the Ministry of Economic Growth and Job Creation, made the declaration in response to Sunday...

The Government of Jamaica is planning to ban additional plastic products by the end of the year.

Senator Matthew Samuda, minister without portfolio in the Ministry of Economic Growth and Job Creation, made the declaration in response to Sunday Gleaner questions about the state of the country’s current ban on single-use plastic bags below 24x24 inches, expanded polystyrene foam containers for the serving of food and plastic straws.

“The Government is on record in its support for the resolutions passed at UNEA 5.2 recently in Kenya. These resolutions target plastic pollution; they call for the establishment of an INC (intergovernmental negotiating committee) to work on the development of a legally binding treaty to manage the issue. Jamaica is an active participant in this process, and once complete, will take appropriate steps to sign the treaty and adhere to it,” Minister Samuda stated in written responses.

He added: “We are, however, not sitting by and waiting on international guidance to take action. Jamaica’s environmental policy will target the issues of micro plastics, and recycling this year. Greater focus will also be placed in closing any loopholes in the current legal framework which could be exploited.”

The minister explained that the policy changes to come will also include the need for recycling to become the official way for plastic disposal. But said additional products will make it on to the banned list of plastics.

“The policy prescription for micro plastics will manifest in a ban for personal care products, which incorporate micro plastics,” Samuda explained.

Meanwhile, the Cabinet minister admitted to seeing reports of bigger plastic bags on the market that avoid the dimensions detailed in the current legislation. That, too, would be addressed, he said.

“A technical assessment is under way which will determine the appropriate size increases required, and inform a legislative amendment this year,” Samuda noted.

When asked about the Plastic Hotline being out of service that NEPA was unable to respond to, the minister stated: “From my perspective, the hotline was never intended to exist in perpetuity. It was established to assist with the initial ‘roll out’ of the ban. All breaches of environmental or industry policy should be referred through the well-known and established channels.”

He said anyone with knowledge of breaches related to the legislation for the banning of plastic packaging items should call National Environment and Planning Agency (NEPA) at 876-754-7540 or 876-754-2437 and the National Compliance Regulatory Authority (NCRA) at 876-618-1534.

“If one is confident a crime has been committed, I also suggest a call to crime stop,” he noted.

The minister also sought to remind the public that primary food packaging is exempt. He said it is often confused as a part of the ban. “So things such as chicken bags and bread bags were exempt,” Samuda said.

When asked to assess the impact of the ban since January 2019 that prohibits the manufacture, importation, distribution or use of stipulated items, Samuda said the intent of the ban must first be understood in order to properly understand if it is succeeding or failing.

“The intention was to remove an estimated 24,000 tonnes of ‘non-recyclable, non-biodegradable, carcinogenic waste’ from our waste stream. Anecdotally, this has been achieved. That position is informed both by JETs (Jamaica Environment Trust) reports from International Coastal Clean-up Day, which analyses waste found on the coastline, and by preliminary reports from landfills,” said Samuda.

However, he accepted that the implementation has not been perfect or without its challenges, especially over the last six months, in relation enforcement.

“As mentioned previously, the implementation has not been perfect; however, nothing is. However, any objective, statistical analysis of the more than 16,000 points of sale in Jamaica will show compliance rates above 90 per cent. We should never seek to make ‘good the enemy of the great’,” Samuda asserted.

According to the minister, while there is room for improvement in monitoring and enforcement, it has not been a “free-for-all”.

“As you would already be aware from NEPA, 42 businesses/individuals have been prosecuted for breaches under the Natural Resources Conservation Authority (Plastic Packaging Materials Prohibition) Order, 2018, which occurred from June 2019 to February 2020. Twenty-seven businesses/individuals have been convicted and fined. Ten matters are currently before the courts for a decision. This clearly shows it is not a free-for-all and consequences will flow from those who flout the intent of the law(s),” the minister said.

“One should also note that the legislative construct primarily targets commercial breaches as opposed to personal breaches,” said Samuda.

On the issue of plastic bottles pollution, the minister said the concern is warranted as they account for 13 per cent of the Jamaican waste stream. But he said what is required is a legitimate deposit refund scheme backed by legislation.

“I will not diminish the efforts of the plastic manufacturers by way of the Jamaica Recycling Partners or that of any of the other recycling companies. These efforts are to be acknowledged and congratulated. However, the results of the noble effort are not in line with national targets,” Samuda said.

“My information is that less than 20 per cent of newly produced bottles are collected for recycling (praying to be incorrect). The USA is at approximately nine per cent. However, Jamaica will need to target rates above 60 per cent.”