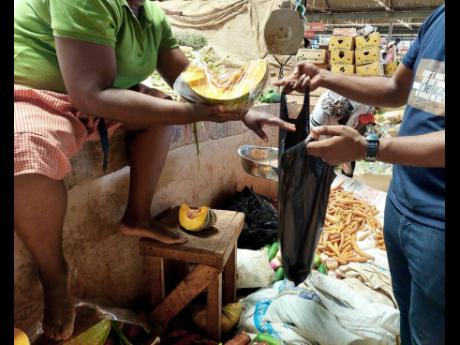 Corey Robinson
The Sunday Gleaner team purchased two scandal bags for $50 from one vendor at the Coronation Market in Kingston, a standard price among at least three other stalls. 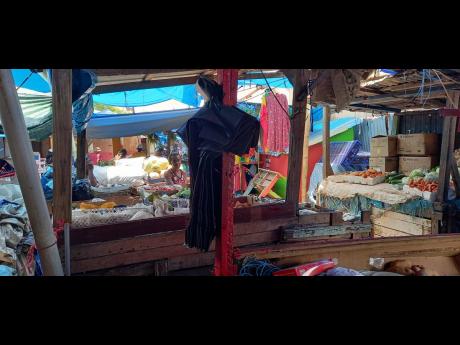 Gareth Davis
At Musgrave Market in Port Antonio, Portland, scandal bags were widely in use.
1
2

Used for shopping, storage, garbage and waste disposal, giving and receiving of goods, and just about anything, the popularly called scandal bag has been the go-to choice for Jamaicans for decades. Banned or not, the use of plastic ‘black scandal’...

Used for shopping, storage, garbage and waste disposal, giving and receiving of goods, and just about anything, the popularly called scandal bag has been the go-to choice for Jamaicans for decades.

Banned or not, the use of plastic ‘black scandal’ bags is so enshrined in the Jamaican culture that doing away with them has become an almost impossible task.

But some believe it is about behaviour change, and has nothing to do, per se, with the scandal bag itself.

At least, that’s how Oneil Rodney, who has been selling in the Coronation Market in Kingston for 18 years, feels.

“Blame the people, not the bags,” he said, reasoning that, like the popular crocus sacks, scandal bags are here to stay. Less of them, however, is good, he admits.

“As me tell you, blame the people dem. Yes, the bags dem not good for the environment but that is because of how the people use them and throw them away,” charged Rodney. “Nothing is wrong with the bags. To be honest, I don’t think scandal bags will ever stop being used in Jamaica. You can’t completely get rid of them.”

Certainly, the prevalence of these noisy-yet-convenient bags has waned since a ban by the Government in January 2019. Interestingly, it earned the name ‘scandal bag’ because of its noisiness.

The harmful environmental impact of plastic pollution led the Government to include the black plastic bags (made wholly or in part of polyethylene or polypropylene) of certain dimensions among the banned products in its phased implementation that was rolled out three years ago. The other banned products are plastic drinking straws and expanded polystyrene foam boxes.

Black scandal bags of the dimension 24” x 24” inches or less, and 1.2 millimeters in thickness, are prohibited from being imported, manufactured, distributed or used.

As The Sunday Gleaner took to the streets last week to ascertain adherence to the ban, the team found three of eight wholesales visited in downtown Kingston selling the banned bags. In the Coronation Market, significantly less vendors than before the ban had them up on their stalls for sale. Most had the accepted fabric shopping bags.

“I don’t sell them, but I give them to my customers,” claimed Cheryl*, another vendor in the Coronation Market. “Remember, the goods have to go into something before you give the customer. Sometimes customers can’t afford the other bags.”

Cheryl explained that the black bags come in three sizes, the smallest capable of holding about 10 pounds. The medium ones can hold double that weight and the biggest can carry about 25 pounds.

A few of her fellow vendors, however, particularly one at an entrance of the market on Darling Street, did not share Cheryl’s benevolence.

The Sunday Gleaner team purchased two scandal bags for $50 from one vendor there, a standard price among at least three other stalls. At the wholesales, the bags were being sold for up to $500 a pack.

“I can’t do any better, I forgot the other bags at home,” smiled a female customer, embarrassed after being approached by the news team on carrying her goods in a scandal bag. “I don’t really use them,” she quipped, walking off.

One of the wholesales from which the news team was able to purchase bags is located metres from the Kingston Central Police Station on East Queen Street; while the others operated from the bustling Orange Street not far away.

Determined to know the exact make-up of the bags purchased and what, if any, standards they were in breach of, The Sunday Gleaner endeavoured to have three sizes tested by the Bureau of Standards Jamaica (BSJ). Those results will not be ready until this week.

However, an informed source noted that the bags brought in for testing did not appear to meet the legal stipulations.

In the initial stages of the ban, the BSJ tested several samples of the plastic bags sent from the National Environment and Planning Agency (NEPA) for properties and dimensions, however, The Sunday Gleaner understands that testing has dwindled since then.

“We have not been testing actively since the phased-out period in 2019/2020 thereabout,” our source shared.

As it relates to what they have been observing about the products on the market, the source said, “The small bags that are, I believe, less than 24 inches, have to be very thick, and that would allow them to be in circulation. If they are small and thin, they would be subject to the ban.

“Only large, thin bags are allowed. We do a burn test and, depending on the nature of the burn, plastic will support a flame, and non-plastic materials will not support that flame. If it is plant-based or starch-based, we can know as well.”

PORTLAND – ‘Enforcement leaves a lot to be desired’

At the Musgrave Market in Port Antonio, Portland, scandal bags were being sold in large proportions, a looming threat for the parish dubbed as the natural gem of the island.

They were also being sold at prominent supermarkets along Folly Road and West and William streets in the parish.

Such plastic products, which are not biodegradable, often end up in the sea, rivers, or littering roadways in the parish. This is suicide for the parish, some residents noted.

“It (ban) was a masterstroke on the part of the government of the day,” commented Ruel Elliott, a schoolteacher in the parish. “Though the execution is timely, the enforcement leaves a lot to be desired.”

“Portland is beautiful and pristine, and it is being spoiled by a heavy litter of plastic bags, plastic bottles, and Styrofoam boxes on beaches, in rivers, and along the main thoroughfare,” he said, noting the impact on climate change and saying that persons found to be importing or producing the illegal substances ought to be brought to book.

“At the time of the ban, there was much talk that the Government was fighting against poor people and hustlers, but it was absolutely necessary to impose the ban,” offered businessman Paul Young. “There is definitely a need now more than ever to protect the environment.”

ST JAMES – Heavy use of scandal bags across the town

Montego Bay, St James is flood-prone, with major deluge events in 2007, 2016, 2017, 2021, and just two months ago this year. On each occasion, the disaster was blamed on improper disposal of solid waste, as tonnes of garbage from communities, most of it plastic, clogged drainage systems.

As the news team took to the streets across the Second City that has experienced millions of dollars in losses because of major flooding, only a handful of commercial operators were in full compliance of the ban on the scandal bags.

Vendors and small business owners along St James and Barnett streets in the commercial district were also using the popular bags. Probably most evident were vendors in the bustling Charles Gordon Market, where both vendors and customers seem to rely heavily on the use of scandal bags. The supermarkets, however, seemed to employ a zero-tolerance approach.

Homer Davis, state minister in the Office of the Prime Minister in charge of special projects and major developments in western Jamaica, said immediate action must be taken against business operators and citizens who disregard the ban.

“It means that the necessary enforcement needs to be done. When the law was put in effect, there was an amnesty period and so anyone found with the banned items now should be prosecuted,” Davis charged.

“Plastic bags and bottles are causing an environmental hazard and are some of the worst active minerals affecting our environment right now. We are creating a serious problem for the environment, and it is a shame when you look in our gullies and see the amount of plastic waste.”