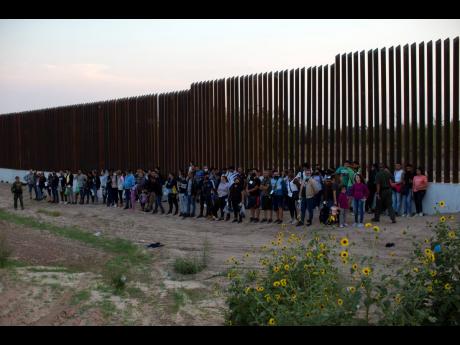 AP
A group of migrants stand next to the border wall as they wait to get taken away by the Border Patrol in Eagle Pass, Texas, on May 21. The Eagle Pass area has become increasingly a popular crossing corridor for migrants, especially those from outside Mexico and Central America. Thousands of Jamaicans are streaming into the US over border walls with Mexico.

A Jamaican migrant is heaping praise on a countryman who freed her from security razor wire as she crashed to an 18-foot fall after being pushed off a United States-Mexico border wall by violent gangsters she was fleeing. The southern St Andrew...

A Jamaican migrant is heaping praise on a countryman who freed her from security razor wire as she crashed to an 18-foot fall after being pushed off a United States-Mexico border wall by violent gangsters she was fleeing.

The southern St Andrew woman is one of hundreds, if not thousands, of Jamaicans streaming from Mexico into the US yearly through human-smuggling collaborators but who had no idea she would have nearly lost her life.

Ironically, the mother of four had fled her homeland after being targeted by gangsters, forcing her to look over her shoulder and take calculated forays into public spaces.

Several of her relatives, male and female, have been killed over time.

The woman, who is in her 30s, will never forget last weekend's near-death encounter when she stumbled on two men linked to a faction who wanted her dead. They, too, were trying to escape their home country for US soil.

“Mi a go cross the border and buck up two a di enemy dem. But you done know, me see him and me nah really pree say di man deh pon da settings deh because everybody a try go across,” the woman, who requested anonymity because of the immigration breach, said in an exclusive Gleaner interview.

But what transpired next took her by surprise.

“The boy push mi off the wall. We go over and me drop straight inna the barbed wire. Mi have life same way and me a move 'round, but me get a lot of cut still, but mi up,” she said, adding that she was grateful she was on American soil, though hospitalised.

She was smuggled in among a group with 12 others, including her attacker, through Mexico.

Her journey to the US reportedly took three days from her departure from Jamaica.

A Jamaican rescued her from danger as she was gripped by pain and anxiety.

She remembers being assisted to run before collapsing. She was later taken by ambulance to a medical facility in the US.

Another woman in the group was reluctant to climb the wall and remained behind in Mexico.

A pregnant woman, whose nationality was not ascertained, also clambered over the 18-foot border wall.

The men who assaulted her were detained, she said, for the immigration breach.

The Gleaner understands that her attackers are wanted by the police for several crimes committed in Jamaica.

The Jamaican woman escaped scrutiny of immigration authorities after being discharged from hospital Tuesday and is now recuperating with family in the US.

Hundreds of illegal migrants take the dangerous trek from Mexico to the US daily, a ceaseless caravan of desperate hope for economic prosperity and safety.

On Monday night alone, more than 400 illegal migrants were accosted and detained by US Customs and Border Protection agents.

On June 6, a Jamaican woman was separated from her five-year-old daughter while crossing the border in Yuma.

The child, Malaisha Millier, nicknamed 'Million', is presumed dead after US authorities fished a body from the water after they were alerted by the woman.

The police told The Gleaner last week during a monthly press briefing that they were aware of the North America human-smuggling trend.

Deputy Commissioner Fitz Bailey, who heads the crime portfolio, said the police were aware of Jamaicans' involvement in human-smuggling schemes in an attempt to reach the US through Mexico. Jamaican migrants generally travel to Panama as their transit port into Mexico.

Speaking on the transnational movement for the first time, Commissioner of Police Major General Antony Anderson also said that the police have seen the movements of criminals who they are after, who have been named or identified out of the country.

“They use the Central American route to get out of here. We have seen that. We are working with our overseas partners in identifying where they are and also what sort of offences they are doing over there so that we can have a joint investigation on this,” Anderson said.