‘All I could do was just hold her hands’ 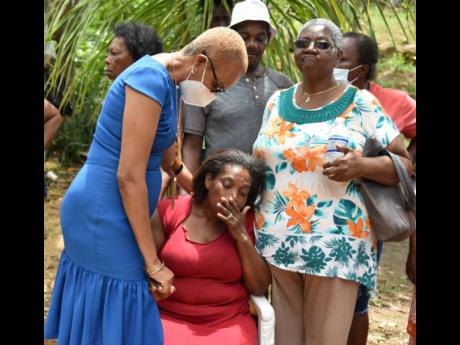 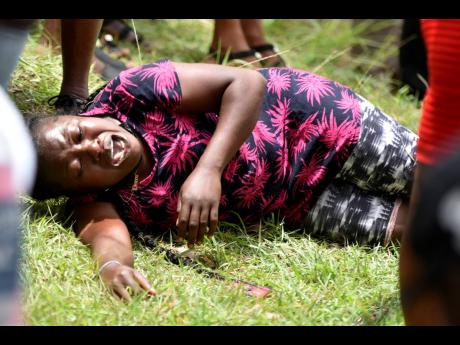 Kenyon Hemans/Photographer
A woman mourns as funeral home employees stretcher away the bodies of the Cocoa Piece murder victims on Tuesday.
1
2

That was the painful recollection of an emotional Fayval Williams, the minister of education and youth, as she shared with her parliamentary colleagues the inconsolable grief that gripped Gwendolyn McKnight, mother of the slain woman and grandmother of the four children who were murdered in Clarendon.

The tragic discovery was made in the community of Cocoa Piece in New Road.

The sombreness that hung over Tuesday’s sitting was palpable as members of the Lower House, led by acting Leader of Government Business Olivia Grange, observed a minute silence as a mark of support for the bereaved family.

Williams and other members of parliament (MPs) said that Tuesday was a dark day for the country. The education minister shared that when she got news of the horrific incident, she and the ministry’s first responder group rushed to the home of the deceased in Clarendon.

“When I got there, it was as if the entire community was out. When I met the grandmother, the mother of Kimberly, you cannot imagine the state that she was in, the sorrow, the crying,” the education minister said, adding that she stood by McKnight’s side for hours.

Williams said the ministry was offering not only counselling and other assistance but financial support to carry the family through their “unspeakable sorrow”.

MP for St Andrew Eastern, a constituency bedevilled by violence, Williams said from conversations she heard in Clarendon on Tuesday, it is reasonable to conclude that no policing could have prevented the killings.

“This requires transformation in the lives and hearts of persons,” she said.

Williams indicated that Tuesday’s incident has triggered a greater resolve at her ministry to “redouble our efforts to reach our children from very early to teach them restorative justice; to teach them how to settle differences from early childhood stage when they grab a toy from each other and when they hit each other”.

Williams told lawmakers that she spoke with teachers at Beulah Primary, where some of the children were enrolled. According to the minister, the grief-stricken teachers are trying to come to terms with the tragedy. The institution was closed on Tuesday.

Commenting on the incident, Dr Horace Chang, acting prime minister and minister of national security, said that a suspect in the heinous killing of the mother and her four children had been taken into police custody. That claim was later recanted.

His remarks came in Gordon House on Tuesday afternoon as members of the Lower House collectively condemned the horrific crime while expressing condolences to the grieving family members.

The national security minister said the brutal killings have shaken the entire leadership of the country and touched the hearts of the entire country.

“This kind of savagery is not about policing, it is a far deeper psychosocial problem of which we have to unite as a country and as a people and find the vulnerable ones and begin to get at the root cause of this prevalence of violence,” he said.

Speaker of the House of Representatives, Marisa Dalrymple Philibert, in remarks at the beginning of the sitting, said the incident has left the country in shock.

“These are dark times for our country. We need as a country ... all of us to stop and reflect and pray for all of us as citizens of this country,” she said.

Opposition Leader Mark Golding said that Tuesday’s killing was a degree of savagery that indicates a disturbed and depraved mind.

“This just appears to be another instance of a willingness to go to extremes to ventilate whatever hurt feelings or anger may have been preoccupying the mind of the perpetrator,” Mr Golding said.