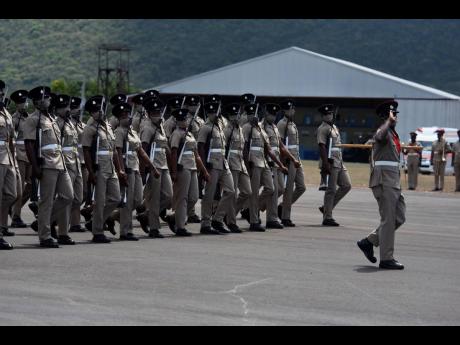 Nicholas Nunes/Photographer
Jamaica Defence Force graduates participate in a ceremonial parade at Up Park Camp, the army's headquarters, on June 5, 2021. Two ex-soldiers have accused the army of torture.

The two former Jamaica Defence Force (JDF) soldiers who were dismissed in disgrace over the disappearance of two high-powered weapons are accusing the army of torturing and intimidating them with death and rape threats. Lascelles Gardener and...

The two former Jamaica Defence Force (JDF) soldiers who were dismissed in disgrace over the disappearance of two high-powered weapons are accusing the army of torturing and intimidating them with death and rape threats.

Lascelles Gardener and Horace Ellis are alleging that the torture and threats were part of the tactics used to coerce them into pleading guilty to losing public property and disobedience to the standing orders.

The duo, who were sentenced to more than 600 days in prison at the JDF’s detention quarters following a trial in the Military Court in August 2020, are seeking to have their conviction and sentence quashed by the Court of Appeal.

The men were taken into custody after their rifles went missing in February 2020. Both claim that they left the weapons in their barracks room when they went missing.

Gardener said that on February 15, he left his weapon in his room and returned from breakfast to find that it was missing. It was while he was searching for the gun that Ellis discovered that his weapon, too, could not be found. Ellis’ had reportedly placed his in a vest beside his bed before he went to sleep.

However, both men are appealing their sentence and conviction on grounds including an involuntary plea of guilt, unfair trial, abuse of authority/unlawful command influence, denial of a legal representative of their choice, and inadequate representation from the defence counsel.

Ellis and Lascelles are also seeking a declaration that their constitutional rights were breached in relation to the trial before the court-martial and that the appeal is allowed to proceed without prejudicing their rights to pursue a constitutional suit.

When the matter was called up in the appellate court on Monday, the Crown had advised the judges that the applicant had filed their documents late and, as such, it would require additional time to respond.

The judges, as a result, ordered the respondent to file the response by July 29 including a copy of the Rules of Procedure that was used for the court martial.

The court further ruled that the respondent is to give the applicant’s counsel permission to view copies of the JDF standing orders and also to provide them with copies of the portions that may be the subject of any objection with respect to immunity on the grounds of national security.

In the meantime, the matter was taken off the list for the registrar to fix a date.

Both men, in their affidavits, are contending that they were subjected to “hell-like” ordeal during their 88- day incarceration.

They are claiming that were intimidated and threatened by numerous JDF officers into pleading guilty and that they were subjected to non-stop interrogation about the missing weapons and, in some instances, were deprived of consecutive nights of sleep.

They also contended that they were denied legal representation by a trained lawyer and instead were given a person who was not trained in law when they requested a lawyer.

One of the applicants alleged that a female officer told him that if he did not tell her something, she would send him to prison “mek dem turn him in a b***y man”. That threat, he said, invoked fear.

The other claimed that he was placed on lockdown for the first two weeks of his detention and had to use a bucket for his toilet. He was reportedly shown notes advising that he could be sentenced to death if the matter was sent to trial and he was found guilty.

Attorneys-at-law Isat Buchanan and John Clarke are representing the soldiers.

Then chief of defence staff, Lieutenant General Rocky Meade, had reported in 2020 that the weapons had not been found and that the army had sought the help of the police to trace the weapons.