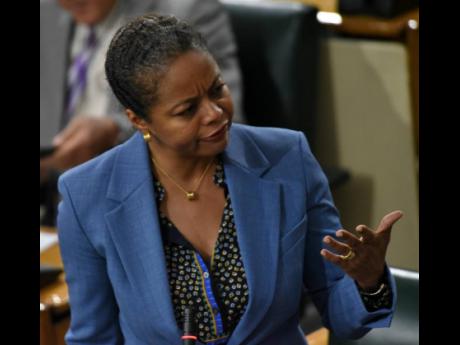 Ian Allen/Photographer
Minister of Legal and Constitutional Affairs Marlene Malahoo Forte addressing Parliament on Tuesday. She said the right to life trumped the right to liberty.

Minister of Legal and Constitutional Affairs Marlene Malahoo Forte has taken issue with at least one aspect of the Supreme Court judgment in the lawsuit brought by Roshaine Clarke against Jamaica’s attorney general.

Last Friday, the court upheld the challenge brought by Clarke against the 2018 state of emergency imposed on St James and declared the Emergency Powers Regulations unconstitutional.

Noting that in the past week the country has been preoccupied with discussions on rights and freedoms, Malahoo Forte said that in paragraph 86 of the judgment, the court indicated that the right to liberty is the most important right of every human being.

“I have been reflecting on that, and as I think of this event where both sides of the aisle are united in the outcry, I really part company with that part of the judgment, because where I am coming from it is the right to life that is the top-tier right for me,” she told colleague lawmakers in Parliament on Tuesday.

She was referring to the slayings of a mother and her four children in Cocoa Piece in New Road, Clarendon, earlier that day.

“My reference is not meant to decry anything but to simply say that from where I am looking at it, and in particular in the context of this occasion, the right to life is the top-tier right,” Malaho Forte insisted.

She said if “we can’t enjoy that right, nothing else can be enjoyed”.