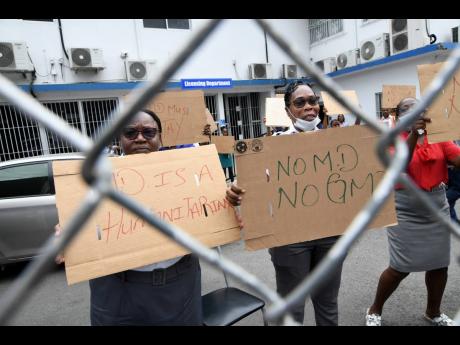 Rudolph Brown/Photographer
Transport Authority workers protest the sudden resignation of Managing Director Willard Hylton at the Maxfield Avenue office near the intersection with Kings Crescent in St Andrew on Tuesday.

Chairman Joseph Shoucair and senior managers of the Transport Authority are scheduled to meet with outgoing Managing Director Willard Hylton today after the public transport regulator was rocked by worker protests in Kingston and St James over the perceived ouster of the agency’s chief executive.

Hylton’s letter of resignation was tendered on Monday and will take effect on June 30.

Shoucair declined to divulge the reason for Hylton’s exit but insisted that he demitted office of “his own free will”.

“His reason, that’s between himself and his employer. It maybe a public company, but the private affairs of a member of staff are private, regardless of whether the company is government owned or privately owned,” Shoucair said.

But Gleaner sources have revealed that the managing director had grown frustrated with the interference of a senior Transport Authority official.

Operations ground to a halt around midday as militant staff pledged their loyalty to Hylton, who they praised as inclusive, worker-oriented, and personable. They and other stakeholders like Egeton Newman, head of bus and taxi lobby, the Transport Operators Development Sustainable Services, said that Hylton had an open-door policy and had implemented progressive policies and procedures.

Neville Robinson, motor vehicle examiner for the Western Regional Office of the Transport Authority, said that Hylton has been the agency’s most effective leader in his more than two decades of working with the state body. He described Hylton as “our brother and our friend”.

“I believe that the Transport Authority has never been at a better place in its history,” Robinson told The Gleaner.

“He is a person who recognised everyone from the ground to the tallest, and so we are hurt and saddened at this decision. ... Our manager is a leader and that’s not the way he leads,” Wood said of the shock resignation.

“He puts his staff first, and if this is a bitter pill for us to swallow, this is not the way he would have given it to us.”

While acknowledging that staff had reacted negatively to the development, Shoucair said that Hylton’s resignation was not a consequence of punitive action for the staging of an illegal 2021 Christmas party at the authority’s offices in December when such events were banned under the then Disaster Risk Management Act (DRMA).

An exposé had been published in The Sunday Gleaner this year.

Disgruntled employees related that Hylton was human resource manager at the Transport Authority in 2017 and moved on to the Jamaica Urban Transit Company a year later. He returned to the public transport regulator in 2019 after the then managing director, Cecil Morgan, stepped aside.

Despite the withdrawal of services, a customer who joined forces with employees in protesting Hylton’s departure told The Gleaner that Hylton was viewed as a “father figure to everybody”.

“When you good, you good,” the customer said.