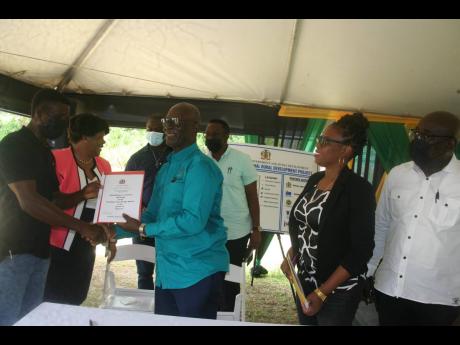 Photo by Bryan Miller
Rural Development Minister Desmond McKenzie (centre) hands a copy of a signed contract to a representative from THLC Company Ltd (left), which has been contracted to do refurbishing at the Chambers Pen All-Age School in Hanover. Also looking on are Dr Michelle Pinnock (second left), regional director in the Ministry of Education’s Region 4; Hanover Western Member of Parliament Tamika Davis (second right); and Lucea Mayor Sheridan Samuels (right).

SOCIAL AND infrastructural improvements slated to take place in Chambers Pen, Hanover, under a $300-million investment to transform it into a model community are set to begin in a matter of days.

Rural Development Minister Desmond McKenzie and other partners signed three contracts on Wednesday for work to begin in the community under the Rural Electrification Programme; for an improved water-distribution network; and for renovation of the Chambers Pen All-Age School.

Road improvement, assistance in farming and other social intervention projects are also part of the overall improvement programme for the community.

Addressing the contract-signing ceremony to mark the national launch of the Rural Development Programme, McKenzie said that Chambers Pen was chosen as the pilot community based on surveys done by the Social Development Commission (SDC) in six communities in six parishes.

“The survey indicated that there are over 900 persons living in this community, with over 350 households ... . It also pointed to a rich tradition of farming, and one of the most important findings of that survey was that a significant number of farmers are young females ... ,” he stated.

McKenzie added that organisations such as the Jamaica Social Investment Fund (JSIF), through the Rural Electrification Programme; the SDC; and Rural Water Supply Limited, an agency of his Ministry of Local Government and Rural Development, are partnering with the ministry to execute the Community Improvement Programme.

Consultations with residents of Chambers Pen had pinpointed road, water, electricity and improvements to the school as their most pressing needs.

McKenzie said work on the school will commence in the summer and should wrap up before the new school year begins in September.

“Water will be provided. We have partnered with the National Water Commission so that when the work is done there will be a consistent flow of water, of over 50-odd thousand gallons, which will be made available to the community,” he said.

McKenzie said the programme also includes a a facility for social housing, through which 11 persons will benefit. Construction on four of the houses will start immediately.

JSIF will also be seeing to the installation of poles and street lights within the sections of the community that are lacking.

Contracts were signed yesterday with LNR Electrical, for house-wiring; Wood Daniels Well Co Ltd, for the installation of pipelines; and THLC Company Ltd, for renovation of Chambers Pen All-Age School.

Cheswick in St Thomas is next in line to benefit from the Rural Development Programme.