... Could still be removed if local poultry meat prices escalate 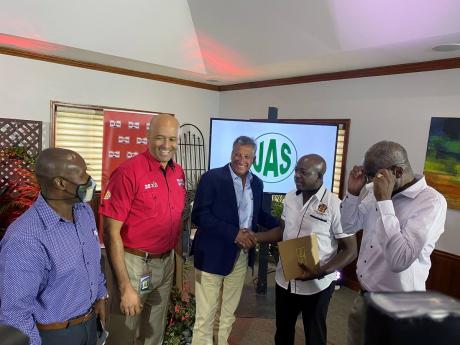 Five months after floating the idea of suspending the common external tariff and other stamp duties on imported chicken leg quarters, Agriculture Minister Pearnel Charles Jr said the Government had not taken the controversial step.

Small chicken farmers and butchers had expressed outrage at the idea after Charles indicated that such a step could be taken while making his maiden address to the House as agriculture minister in January.

With the rising cost of chicken prices in Jamaica, primarily due to the increase in prices of raw materials, he said then that it would help to secure a cheaper source of meat protein for consumers until the local market recalibrated to normal levels.

In an interview with The Gleaner at the launch of the Denbigh Agricultural, Industrial and Food Show on Wednesday, which was held at Jamaica Broilers Group’s St Catherine head offices, Charles said that the Government did not propose the importation of leg quarters.

“What we had done is, we made it clear that if it is that the price [of chicken] gets out of reach for consumers, the Government has within its remit the tool to always remove that tariff barrier which allows for the importation of leg quarters, and would help us to get the price to be more affordable,” he said.

“We still have that tool and we still are able to do so if the assessments trigger that eventuality,” he added.

In the interim, the agriculture minister said that the Government had discussions with the broiler companies about the affordability and availability of chicken.

“We are focusing our attention more on building up the local industry and the small farmers, but we still hold the tool, so if it ever comes to that stage, we are still able to use the removal of that tariff barrier as one tool to help in stabilising the prices,” he said.

Jamaica Broilers had announced a 10-per-cent increase in chicken prices at the end of January. In February, Caribbean Broilers also announced a six-to- eight-per-cent hike.

For his part, Jamaica Broilers President and CEO Christopher Levy said that the price of chicken is still being impacted by levels of uncertainty worldwide.

“We’re in a time again now as the global uncertainties are in a lot of ways unexplainable, and we’re so far from having any influence or impact on it and we’re just takers. I was watching the news last night and no wheat is coming out of Ukraine and the harvest is coming in … and they just can’t store it any more,” Levy said.

Ukraine, the world’s fifth-largest exporter of wheat, is embroiled in a bitter months-long deadly conflict with Russia.

“That’s going to have an impact on our wheat prices in Jamaica and worldwide. It’s not our doing, and we can’t explain it that somebody would be so single-minded that they’re willing to impact the economies and people eating in the world,” he added.

He had advice for leaders and decision-makers in Jamaica.

After a two-year hiatus, the Denbigh Agricultural, Industrial and Food Show will return to its home at the Denbigh Show Grounds from July 30 to August 1.