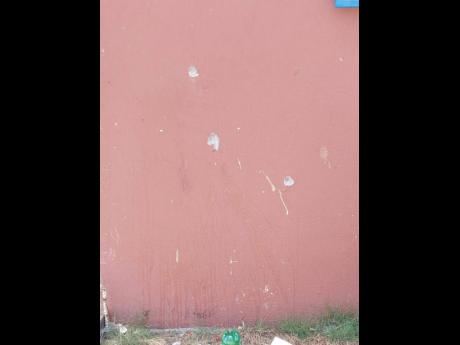 Photo by Andre Williams
The bullet-riddled wall were Shereen Pinnock, 40, was slain along Red Hills Road on Tuesday. Three others were injured.

Cassia Park is in the grips of fresh tensions amid an escalating gang war that has sparked the killing of two women in a matter of days. Investigators theorise that the men who launched a deadly attack on Sara-Gaye Mason on Saturday targeted the...

Cassia Park is in the grips of fresh tensions amid an escalating gang war that has sparked the killing of two women in a matter of days. Investigators theorise that the men who launched a deadly attack on Sara-Gaye Mason on Saturday targeted the wrong twin.

Sleuths have linked that homicide and the murder of another woman, 40-year-old Shereen Pinnock, on Red Hills Road Tuesday, with the latter viewed as a possible reprisal.

Keith Mason is ruing cruel fate after losing his 20-year-old daughter, Sara-Gaye, in a gun attack on Verene Avenue about 5 p.m. Saturday.

Sara-Gaye, nicknamed ‘Little’, died leaving a nine-month-old infant. The toddler is in the care and custody of the father, The Gleaner has learnt.

Sara-Gaye was no longer a resident at Verene Avenue, but was beckoned to the location by her sister.

“Whenever she comes, she always call her and tell her say, ‘You know me reach up a Daddy … You a come over or what?” Mason told The Gleaner, adding Sara-Gaye was initally reluctant.

Sara-Gaye Mason was described as a business-savvy and progressive woman who once had undergone training to become a nurse.

The drama that unfolded was swift and calculated. The car transporting the gunmen drove on to the cul-de-sac and parked before the shooter exited.

The gunman walked up to Sara-Gaye, who was seated in the company of two other females, and opened fire.

Mason said he saw the car entering and heard the explosions, but had no idea that his daughter was the victim.

“A dat mi get for mi Father’s Day gift,” he said, sarcastically.

“It’s mi baby. She nuh give no trouble. She nuh live no life yet,” Mason said.

It was revealed that the twin who was targeted barely cheated death by minutes. She had just left the yard to purchase crab.

Mason said she died on the spot after being shot repeatedly in her head.

Their last conversation was about her promising him to come over and cook for him on Father’s Day.

Mason is the biological father of three girls and raised another he considers his own. He said the other twin is trying to cope.

“You going to hear a lot of things when things happen, you know. Some of them are just people make up things because we grow up inside here and sometimes, we hear things and nothing really go so. We hear the talk and we hear other talk,” a family friend said.

Commander for the St Andrew Central Police Division, Senior Superintendent Marlon Nesbeth, told The Gleaner that a feud had been raging between the Diplomat and Gun Man Town gangs. The Diplomat Gang is primarily enclaved on Verene Avenue and nearby areas while the Gun Man Town faction operates mainly along Red Hills Road.

“The girl that was shot and killed on Verene Avenue, it is suggested it may have been orchestrated from the other side,” Nesbeth said.

The police said the leadership within the gang has some issues.

“The fact is she is the sister of someone who is connected to the Diplomat Gang and it might be a case of mistaken identity, and it was really that particular sister they wanted, but they got this one instead. Subsequent to that, there was a reprisal on Red Hills Road,” Nesbeth said of the Pinnock murder. Three others were injured in that incident.

Mason, who has lived in Cassia Park for 38 years, said Sara-Gaye was the first female to be killed in that section of the community during that time.

An air of anxiety hung over the community Wednesday, with many people opting to stay off the streets.