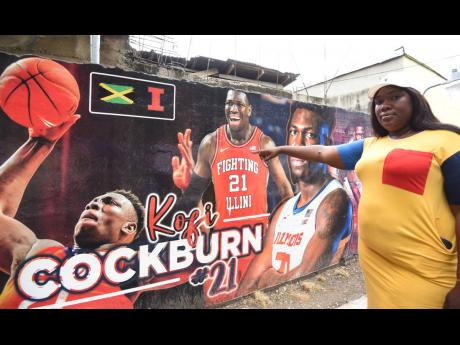 Ian Allen/Photographer
Lindiway Cockburn, sister of Kofi Cockburn, who was signed to the Utah Jazz during the NBA Draft on June 23, points to a mural in his honour in his home community of Common , which is located off Red Hills Road in St Andrew. 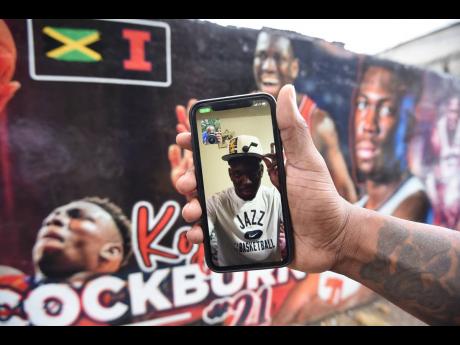 Ian Allen/Photographer
An elated Kofi Cockburn speaking to The Gleaner via a video call yesterday.
1
2

The 22-year-old alum of Illinois University and Fighting Illini basketball team told The Gleaner yesterday that it has been a dream come true.

“I’m excited. I have been waiting, anticipating this moment for a long time. I cherish this moment with my family. I was excited for my mom because she was really happy and she wanted it for me. She knows how hard I work,” he said.

Cockburn said that since receiving the news, he has been in touch with family and friends back home in Jamaica.

“Watching them celebrating [in Jamaica] and being here with my mom and my brother and sister talking about the past, the journey, and enjoying every moment [is exciting],” a joyful and humble Cockburn said, donning his Utah Jazz hat.

His older sister, Lindiway Cockburn, is also very excited and told The Gleaner that she, too, had been waiting for this moment for over a year after Kofi forwent his eligibility to the NBA Draft 2021 and returned as a junior in college.

“It’s time now, and eventually, it happened, and we are very proud of him. He has a lot of plans for his community, friends and his family,” said the resident of Common off Red Hills Road in St Andrew.

He, however, flies the national flag high at every occasion.

Residents of Karl Samuda Drive, formerly Black Ants Lane in St Andrew, were yesterday in a jubilant mood for the son of the soil.

“Good things come from Nazirite. Mi love dat! How yuh mean!” a resident screamed on the approach of our news team.

Sativa told The Gleaner that he feels great for his childhood friend, who he labelled an inspiration for youth in the community.

“A nuh one normal feeling. From [Kofi] start play basketball, ... if yuh fi deh ya a evening time, the little youth dem, every evening dem start come out and go over school go play basketball,” he said.

Nippi said: “Fi see a ghetto youth rise from the slum and make it out, you know what time it is. It inspires the youth dem a lot. Dem want reach weh him reach and dying to be like Kofi.”

Both friends said they saw it coming because Kofi has always been humble and hard-working.

They recalled that Red Hills Road erupted in jubilation on Thursday night when news came that though going undrafted, the Utah Jazz signed Cockburn.

Lindiway told The Gleaner that they had gathered along Karl Samuda Drive, where there is a large painting of Kofi, to view Thursday’s NBA Draft.

“A just the joy! Rain all a fall. Tears of joy,” said Nippi. “His stats and everything show that he is worth the signing.”

Cockburn put up career numbers in his final season in college, averaging 20.9 points and 10.6 rebounds and helped the Fighting Illini claim the co-regular season championship in the Big Ten.

Sanjay Shaw, a teacher and resident of Common, said Cockburn is one of the outstanding youngsters from the community.

“The community really have to look towards Cockburn right now. He is one of the future right now, one of the youth dem that can inspire the entire community right now to look at life different,” Shaw said.

“Mi glad mi know him. Him done start inspire already. Is a great look for the community. Mi feel proud of him,” said Nadisha Harrison.

Another Jamaican, Josh Minott, was drafted as the 45th pick in Round Two by the Charlotte Hornets, but traded to the Minnesota Timberwolves.