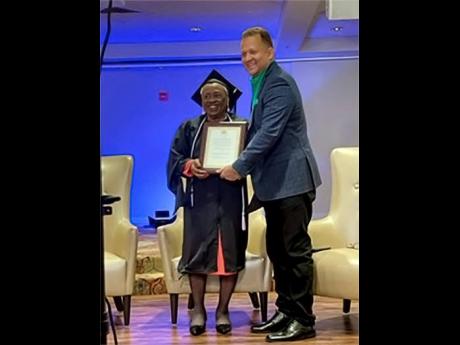 Contributed
Violet Edwards, the Jamaican who was awarded an associate degree at age 96, receives a plaque from Oliver Mair, consul general to Miami, recently.

She is 96 years old and just graduated with an associate degree in science and liberal arts. Jamaica-born Violet Edwards, who put her education on hold for years as she put her daughter through medical school and raised...

She is 96 years old and just graduated with an associate degree in science and liberal arts.

Jamaica-born Violet Edwards, who put her education on hold for years as she put her daughter through medical school and raised her two grandsons, was on Saturday crowned with academic glory by a representative from Mercy College, where she completed her degree.

Born in Portland, Jamaica, the Happy Grove High graduate spent her entire career in the Jamaican postal service, rising to regional inspector for the eastern end of the island before migrating to the United States in 1973. Edwards settled in New York before moving to Maryland, and later, Florida, where the family moved in 1999.

Edwards said that she credits COVID for giving her the drive to go for her degree.

“I was stuck in Jamaica for about four months because of COVID, and while there, I started searching through things and came across my records showing that I had credits from the (now-defunct) College of New Rochelle,” she said in a Gleaner interview at the weekend.

Edwards reached out to the College of New Rochelle and found that her transcripts and other records had been transferred to Mercy College when New Rochelle College closed.

“I contacted Mercy College, and I was informed that I have credits that would allow me to pursue my degree, so I began taking courses online. It was challenging because I was unfamiliar with working online, but I pursued, and the end result is that I successfully earned my degree,” she said.

According to the new graduate, her records showed that she had more than 84 credits towards her degree and a grade point average of 4.

Edwards said that she had been willing to defer her own dreams, putting her daughter’s ambitions before hers.

“I devoted the time to my daughter’s education and raising my grandsons,” Edwards told The Gleaner, referencing her labour of love.

Her daughter, Dr Christine Edwards, whose private practice is in perinatology – a branch of medicine concerning the care of pregnant women who have complications - said that her mother had more than enough credits to have earned a bachelor’s degree.

“To earn her bachelor’s, the requirement is 120 credits, and she has 140. However, because she was considered a transfer student by Mercy College, she was unable to get the bachelor’s,” said Dr Edwards.

The elder Edwards said that she had been guided by the sage advice of poet Henry Wadsworth Longfellow: “The heights by great men reached and kept were not attained by sudden flight, but they, while their companions slept, kept toiling upward through the night.”

“It inspired me because it tells me that I can achieve anything if I put my mind to it,” she said.

Her message to young people is never give up.

“Don’t hesitate! Don’t procrastinate! Go ahead with determination and you will succeed,” Edwards said.

She said that it is never too late to achieve one’s goal.

Jamaica’s consul general to Miami, Oliver Mair, presented Edwards with a proclamation from the consulate in recognition of her achievement.