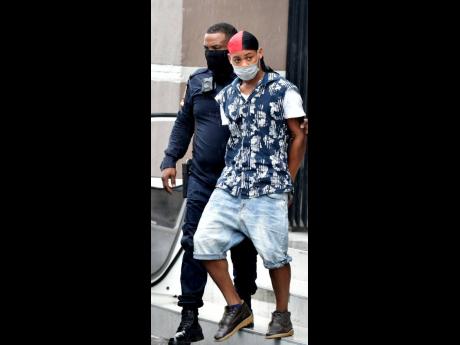 Kenyon Hemans/Photographer
Rushane Barnett exits the Supreme Court building on Tuesday after participating in a hearing. He has been charged with five counts of murder in relation to the Cocoa Piece, Clarendon, massacre. The prosecution is seeking the death penalty.

Senior defence lawyers have expressed mixed views about prosecutors’ plans to seek the death penalty for the 23-year-old man accused of the throat-slashing murder of a mother and four children in Cocoa Piece, Clarendon, last week. Rushane Barnett,...

Senior defence lawyers have expressed mixed views about prosecutors’ plans to seek the death penalty for the 23-year-old man accused of the throat-slashing murder of a mother and four children in Cocoa Piece, Clarendon, last week.

Rushane Barnett, who is charged with five counts of murder, was served by the prosecution with a death-penalty notice when he made his first appearance in the Home Circuit Court on Tuesday.

The defendant bypassed committals proceedings in the Parish Court and after Director of Public Prosecutions (DPP) Paula Llewellyn preferred a voluntary bill of indictment.

He was arrested and charged after Kemesha Wright, 31; Kimanda Smith, 15; Sharalee Smith, 12; Rafaella Smith, five; and 23-month-old Kishawn Henry Jr were discovered inside their home with chop wounds and their throats slashed on June 21.

Llewellyn, in a press statement on Tuesday, explained that the matter was fast-tracked to the High Court and the notice served on the defendant in light of the allegations, the evidential material gathered, and the public interest.

The DPP said that under Section 3(1) of the Offences Against the Person Act, persons who are found guilty of multiple murders in one incident shall be sentenced to life in prison or to death.

At the same time, the act noted that the death penalty cannot be imposed unless the defendant is given sufficient notice long before the start of the trial.

“In light of the above provisions and a consideration of the circumstances of the case, it has been deemed appropriate by the ODPP for the death-penalty notice to be prepared and served on the accused at the time that the voluntary bill of indictment is laid in court.

“This is to ensure that at the earliest opportunity, the accused is made aware of the intention of the prosecuting authority to make the recommendation that the death penalty is an option for the sentencing judge consequent on a conviction after trial for the five counts of murder as outlined on the indictment,” she said.

However, given the constitutional challenges that the country is likely to face if Barnett is sentenced to death, as well as Jamaica not executing anyone since 1988, some criminal lawyers were not in agreement with the move.

Senior attorney-at-law Linton Gordon said while he understands the DPP’s need to satisfy the public’s recent call for a return of the death penalty, he believes it is pointless to seek that outcome.

“Under the Offences Against the Person Act, you do have categories that attract capital punishment, such as killing a judge or a judicial officer or member of the constabulary or multiple killings arising out of the same situation such as the one in Clarendon, and I think she is just saying given the call, she is going this route,” he said.

But he said further: “I believe it is a waste of time. It might satisfy the immediate desire of the public and makes the DPP popular, but I think it is going to be drawn out, it is going to be contentious. It is going to go to the Privy Council maybe two, three times, and at the end of the day, I don’t think there is going to be any execution.”

However, Gordon, who said that he in principle disagrees with the death penalty, conceded that the prima facie gruesomeness of the crime would meet the bar for capital punishment.

“What we need to know is what are the steps taken to satisfy the requirements in relation to time within which the case must conclude, including an appeal to international body, because it not just applying for death penalty, it is a matter of the case concluding within a time frame,” Knight elaborated.

He declined to comment on whether the facts so far disclosed satisfied the criteria for Llewellyn’s decision.

Another senior attorney, Oswest Senior-Smith, however gave his support for the prosecution’s move, noting that he believed it would send a strong message to society.

He said that the Offences Against the Person Act permitted the prosecution to take that tack, though he acknowledged that it was moot whether the death penalty outcome was “pragmatic or practical”.

“... But I think it is certainly telegraphing to that particular accused and to the entire Jamaican society the opprobrium that the society itself, and the prosecution arm of the society as far as this offence is concerned,” Senior-Smith told The Gleaner.

Barnett was unrepresented when he appeared in court on Tuesday.

Justice Leighton Pusey told the defendant that a court-appointed attorney would further explain the implications of the death-penalty notice. Barnett was also advised that he could still select a lawyer of his choice to represent him if he could afford to do so.

The defendant, who had a sad countenance, complained to the court that the police at the lock-up where he was staying had been assaulting him and had refused to take him to the doctor.

“I don’t know if the crime, but a bare threaten dem a threaten me still, and a lick mi inna mi back and dem stuff deh,” he said.

The judge told him that he was innocent until proven guilty and further advised him that he could report the matter to his lawyer.

Barnett was also told that senior police officers who were present would take note of his complaint and investigate the matter if his claims were credible.

Barnett was remanded until July 22.