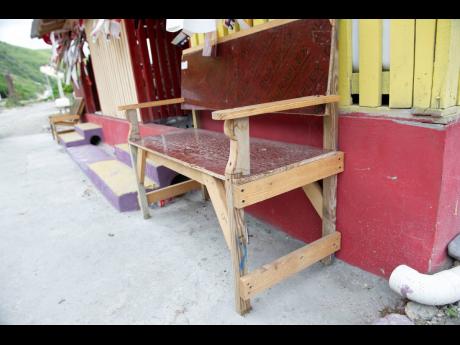 Ricardo Makyn/Chief Photo Editor
Empty benches are seen outside the bar operated by Valerie Dixon in Grants Pen, which has turned into a ghost town since the opening of a segment of the under-construction highway rerouted traffic from the St Thomas fishing village. 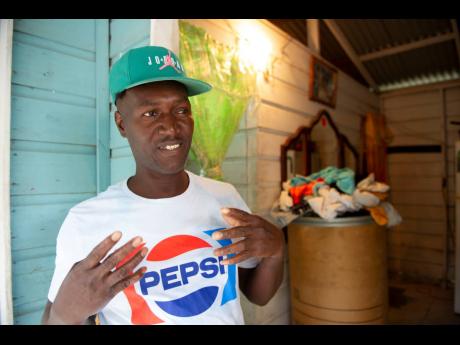 Ricardo Makyn/Chief Photo Editor
David Bowen is one of several entrepreneurs in Grants Pen, St Thomas, who are lamenting the plunge in business. 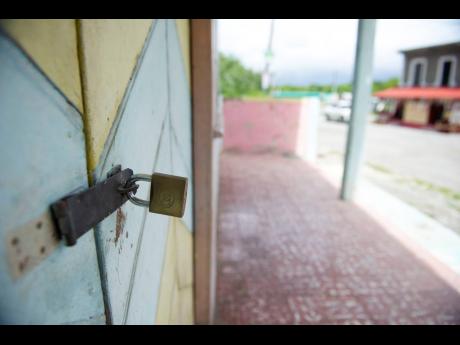 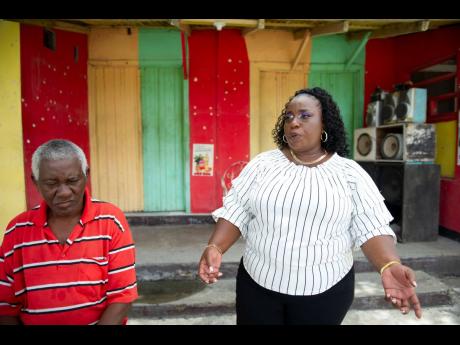 When entrepreneur David Bowen saw the roll-out plan for the Southern Coastal Highway Improvement Project, the Grants Pen resident said he predicted the St Thomas fishing village would soon lose its economic value. But some residents jeered him and...

When entrepreneur David Bowen saw the roll-out plan for the Southern Coastal Highway Improvement Project, the Grants Pen resident said he predicted the St Thomas fishing village would soon lose its economic value. But some residents jeered him and didn’t buy into his doomsday forecast of a collision of past and future.

Three months after government authorities rerouted traffic to the bypass, Bowen’s words of woe have become salt in the wounds of fellow fisherfolk and their families.

Business operators are lamenting financial losses they have incurred since March, as the once vibrant community has almost become a ghost town, with the odd vehicle or two passing by every half-hour, residents say.

It’s a jeremiad that often comes with the bulldozers of development that pave a road with billions of dollars of investment but which threaten small, highly dependent communities that become backwaters bereft of commerce.

Government officials and deep-pocketed investors offer a counternarrative: that the highway will give wings to the economic potential of the eastern parishes of St Thomas and Portland.

But on Tuesday, such lofty pronouncements seemed like a fairy tale to Grants Pen interests, as only a bar and haberdashery owned by Valerie Dixon were open for business.

The doors of four other shops and bars on the Grants Pen main road were shut tight.

Dixon, an elderly woman, said she has primarily kept her doors open for two reasons – because the business was started by her beloved mother and it’s the source of her livelihood.

“I’m losing about 50 per cent of my usual income per month. We [usually] have passer-by customers. First time, the passers-by dem would’ve stopped, get something, run on back and such, but we nah get that no time at all again,” Dixon said in a Gleaner interview.

Dixon, who now mainly depends on residents’ patronage, said she is still faced with the same overheads and other expenses each month, even with reduced monthly income.

She is now considering hosting entertainment events to give herself a glimmer of hope of attracting patrons.

“Mi can’t lock di shop, because how mi a go survive?” she asked.

Arthur DaCosta, a 58-year-old entrepreneur who has closed his shop and resorted to selling coal, said keeping his business open just no longer made any sense. The support of residents from the community isn’t enough, he said, to make operations viable. He operated his shop for 25 years selling rice, flour, beer and other groceries.

DaCosta is now battling with the side effects of a more difficult job – like swollen feet from the heat of burning coal.

His daughter, Princess DaCosta, a security guard working in Kingston, said the road closure has driven up transportation costs.

She is charged $500 for a return trip from the main road into Grants Pen.

“Sometimes the vehicle dem no wah turn off. People a complain. Dem nah turn off come down here, and my little money weh mi a work, it can’t do nothing,” Princess said.

She also has three children who depend on her salary for survival.

Allan O’Sullivan, a small entrepreneur who cooks and sells fish, is also suffering from bypass blues.

The change of fortunes has extinguished the flame of his passion – proverbially and literally.

“One solution is for them to build a space out on the main where we can go and sell and passer-bys can stop and patronise us, because people are not driving down here anymore and the professionals down here are moving out because of this,” he said on Tuesday.

O’Sullivan also believes the best solution for revival of Grants Pen is for the Government to build an entertainment and leisure venue for the hosting of parties and round-robins.

For Bowen’s part, he, too, sees value in redeveloping the area as a pit stop for tourists.

He once paid $170 from Kingston to Grants Pen, but has been hit with a $500 fee for the same distance.

Additionally, he has infrastructural concerns and fears of future flooding.

“The community dead! Dem don’t even make a proper drain,” he said, referencing fears that run-off from the mountains will compromise the community.

The National Works Agency has, however, said that those assertions are misconceived.