J’cans anxious to finish programmes as PNP hands over grants 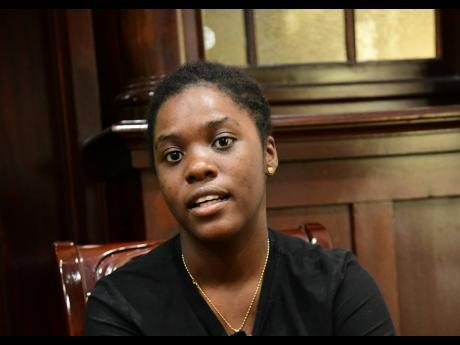 Gladstone Taylor/Multimedia Photo Editor
Twenty-one-year-old Aliya Johnson, who was studying to be a veterinarian in Ukraine, is now looking for another European university to continue her studies. 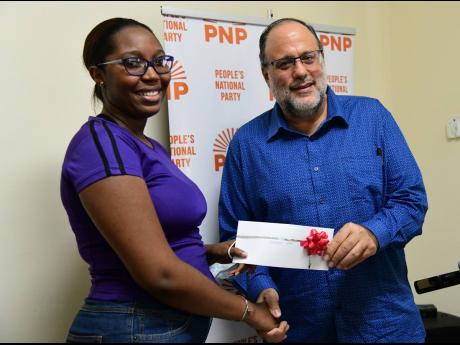 Gladstone Taylor/Multimedia Photo Editor
Georden Shaw (left) accepts a J$75,000 grant from People’s National Party President and Opposition Leader Mark Golding yesterday. Shaw was among the 22 Jamaican students who were forced to flee Ukraine in the wake of the Russian invasion in February 2022. The students have been given grants to continue their studies and meet unforeseen expenses.
1
2

Facing the daunting task of getting her studies back on track after fleeing Ukraine in February in the wake of the Russian invasion, 21-year-old Aliya Johnson is pulling out all the stops to achieve her career goal: that of becoming a doctor of veterinary medicine.

Months after she started to read for a degree in veterinary medicine, the young woman, along with another 21 Jamaican students, had to leave Ukraine in a mad rush after Russian President Vladimir Putin ordered his troops to attack their western neighbour.

From her formative years, Johnson had a very special love for animals, so it was not surprising when she decided to pursue a career in veterinary medicine.

Tuition fees to pursue studies in that field were costly in the Western Hemisphere, and as such, Johnson turned to Ukraine, where institutions offered the programme at an affordable cost.

With the huge setback in her studies owing to the conflict, which broke out in February, Johnson told The Gleaner that she had started to send out applications to other universities in Europe.

However, she is pushing to replace certificates she had to leave at the Kharkiv State Zoo Veterinary Academy when the war started. She has already applied to the Caribbean Examinations Council to obtain records of her passes at both the Caribbean Secondary Education Certificate and Caribbean Advanced Proficiency Examination levels.

Quizzed on how she intends to proceed in determining a new university to complete her studies, Johnson said: “If I were to tell you that I had it figured out, I would be lying, but there are a lot of schools I am looking at – some in Poland, Bulgaria, Romania, and Hungary.”

On Wednesday, Johnson collected a cheque valued at $75,000 from Opposition Leader Mark Golding, who handed out similar sums to other students whose studies were cut short by the conflict.

Johnson is looking forward to restarting her course of study in October, acknowledging that it will require hard work and determination to become a doctor of veterinary medicine in the next five years.

The young woman said she has plans to return to Jamaica after completing her studies somewhere in Europe.

“I really can’t wait to get this degree started and done so I can live my life the way I want to live,” she told The Gleaner.

Another student, 25-year-old Kavaun Chambers, had started the third year of his studies in medicine at the V.N. Karazin University in Kharkiv.

Chambers was in a hurry when he visited the Office of the Leader of the Opposition yesterday to collect his cheque, explaining that he had taken time off from a job he has secured since returning home to help build up his resources to pay for his education.

While universities in Türkiye and Dominica have offered Chambers a place to continue his study in medicine, he is struggling to obtain a transcript from the university he attended in Ukraine.

However, he told The Gleaner that the university in Dominica indicated that he could begin his studies and submit the transcript later.

But another major roadblock for Chambers is the US$11,000 tuition fee, representing half of the cost he has to find to attend the institution.

“It’s my dream,” he said of becoming a medical practitioner, expressing confidence that he would prevail over what he deems to be a temporary setback.

Noting that two of the former Ukrainian students were from his constituency, Golding said that the plight of the group touched his heart as he was receiving direct communication from concerned relatives and even the students as they tried to flee the war-torn country.

The US$10,000 raised by the party was given to the Ministry of Foreign Affairs to distribute to the students. The sum was increased to US$11,000 for the students.

However, Golding said that a subsequent letter from the ministry stated that a determination had been made to use the PNP’s donation to reimburse the Government for part of the cost of transporting the students to Jamaica.

He said he found that development inappropriate against the backdrop that the Government had pledged to fully fund the cost to bring home the students.

“I felt that that was the Government’s contribution. I think that more should be done and should have been done, but we were glad that those costs were covered, but our funding should not be used to reimburse the Government for that.”

The opposition leader said he wrote the Government “in fairly strong terms, asking them to confirm that they would make those funds available to the students”.

Georden Shaw, who studied medicine in Ukraine, thanked Golding on behalf of the group.

“From the onset of the invasion, he never left our side. He kept in constant contact with us, he encouraged us and supported us, and it is rare that you find someone who is in such authority supporting youth, and we are really appreciative,” she said.