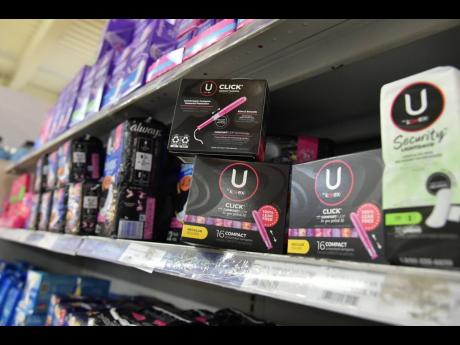 Kenyon Heman/Photographer
Tampon products on the shelves of Brooklyn Supermarket in Half-Way Tree, St Andrew, yesterday. Women in Jamaica, like those in other countries, have been experiencing challenges sourcing the menstrual hygiene product.

A tampon shortage believed to have been triggered by global supply chain issues compounded by rising fuel costs, problems sourcing raw materials, and labour shortages has been causing distress for many Jamaican women trying to find their preferred...

A tampon shortage believed to have been triggered by global supply chain issues compounded by rising fuel costs, problems sourcing raw materials, and labour shortages has been causing distress for many Jamaican women trying to find their preferred brands, which have suddenly disappeared.

Among the main brands affected locally are Tampa and Playtex.

Operators of the Hi-Lo Food Store in Manor Park, St Andrew, told The Gleaner that they have not received the usually-in-stock Tampax for roughly a year.

In its early stages of distribution to Hi-Lo, Playtex, the second best-seller, was “on and off again”, but since the last year, its distribution pattern has been more unpredictable as the retailer has not been receiving any supply, a spokesperson informed our news team.

The last shipment of Playtex was received in April, with a limited supply of the scented and unscented Playtex Simply Gentle Glide Tampons.

Five cases containing packs of the six boxes in regular absorbency and four cases of the heavy absorbency were delivered.

“It’s finished now, and we haven’t received anything. In other queues, we’re not getting none at all,” the spokeswoman said, adding that she was unsure of whether the other varieties had been discontinued.

She added that consumers have been disgruntled over the challenge finding the menstrual hygiene product, “especially the Tampax. They are asking why we don’t have any, but the issue is supplier shortage”, she said, noting that all Hi-Lo branches have been affected.

Judi Watson, a consumer from the Portmore area of St Catherine, said that the shortage became apparent in March. Although she doesn’t typically buy tampons on a monthly basis due to her irregular menstruation, she told The Gleaner that when she needed it, supplies were not readily available.

“The first brand I noticed that went missing completely was Playtex, which is my preferred brand. Before March, there were only ‘normal’ sizes available, and I couldn’t find ‘super’,” she said, adding that a friend had also been unable to find well-known brands in pharmacies, supermarkets, or wholesalers in the Corporate Area, including the popular MegaMart.

Another customer recalled how she has not been able to get any ‘super’ tampons at MegaMart’s Waterloo Road location since December.

Another claimed that the tampons available were not the brands with which they were familiar.

Jamaican women have also taken to social media platforms to express frustration in their search for certain brands.

Inflation and supply issues with essential components like cotton and plastic, which are also used in personal protective equipment and have been in high demand since the beginning of the pandemic, are believed to be the root causes of the shortages, according to CNN Business.

The ongoing Russian-Ukraine war also contributes to the disruption and has severely restricted the supply the report said, as both countries are major exporters of fertiliser, which is essential to grow cotton used in the products.

This scarcity also comes on the heels of a baby formula shortage, which frustrated parents in the United States.

The reports went on to say that drug store giants CVS and Walgreens were aware of the shortages in period products and have been working to replenish supplies.

The Brooklyn Supermarket outlet in Twin Gates Plaza in Half-Way Tree has also been impacted. About midday when The Gleaner called the store yesterday, a representative said that there was only one pack of the Kotex brand left on the shelf.

The branch’s most recent order for the Tampax brand, placed two weeks ago, has not been delivered.

Kevin O’Brien Chang, chairman of Fontana Pharmacy, told The Gleaner that the supply is “spotty” in the brands mentioned. This, he noted, was owing to the issues being faced in the United States. He said that the problems, which surfaced last year, have worsened over the course of 2022.

Nevertheless, he said that Fontana would “explore all avenues” to identify sources of any available stock in the brands impacted although the problem seemed to be out of their hands.

The Tampax brand would typically be distributed by Grace Foods & Services (GFS) to a sizeable portion of the island, including wholesalers, pharmacies, convenience stores, gas stations, and gift shops in some hotels, said GFS General Manager Tamara Garel-Thompson.

But after months of waiting, she said that GFS received a supply of four product varieties last week and is anticipating that things should begin to return to normal within days.