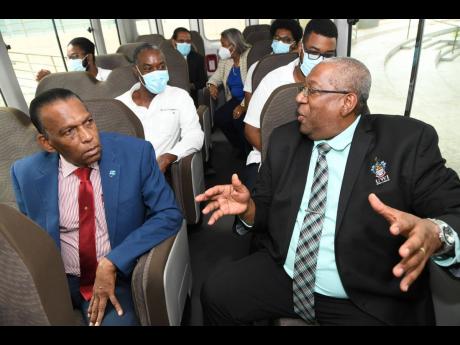 Rudolph Brown/Photographer
W. Billy Heaven (left), CEO of the CHASE Fund, chats with Professor Dale Webber (right), principal of The University of the West Indies, Mona, on board a bus donated to the Faculty of Medical Sciences by the CHASE Fund and Toyota Jamaica yesterday. Immediately behind them are Bradley Bond (second right), guild representative for the Faculty of Medical Sciences, and Howard Foster, branch manager of Toyota Jamaica’s Old Hope Road location. 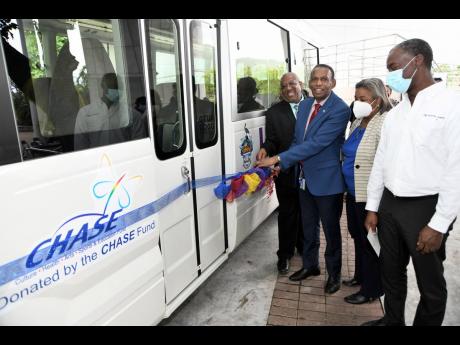 University of the West Indies (UWI), Mona Principal Professor Dale Webber has issued a charge to Toyota Jamaica to

provide more hybrid or electric vehicles to the Jamaican market.

Webber was speaking yesterday at a handover ceremony for a Toyota Coaster bus to the UWI’s Faculty of Medical Sciences by Toyota Jamaica and the CHASE Fund.

Acknowledging that CHASE has been a long-standing partner of the university, Webber expressed appreciation to the donors on behalf of the students as he issued the charge to Toyota.

“Some 23 per cent of university vehicles – the fleet that we have – are Toyota. I want to move that to 50 per cent, but there is a condition,” said Webber. “Of that 50, I want half to be either hybrid or electric because we must move in terms of the environmental footprint in order to make a change.”

Dean Dr Minerva Thame also extended gratitude to the donors for the bus, which will assist with the transportation of its students to hospitals for clinical rotations.

Thame noted that when the medical school was much smaller, the entire training programme was done with the University Hospital of the West Indies and Kingston Public Hospital.

She explained that as the faculty grew – and in an attempt to maintain small ratios between lecturers and students – they have engaged external sites such as Spanish Town, Cornwall Regional, St Ann’s Bay, Mandeville Regional, and May Pen Hospitals, as well as the Bustamante Hospital for Children.

“We are responsible for transporting our students to these external sites. Last year, shortly after I took office, I saw one of our buses parked in front of the building, and in true Minerva style, inquisitive, wanted to see what the students were experiencing when they went on these buses,” Thame recounted.

She recalled that she knew the bus was old, as it was purchased in 2005, but what she saw on the inside was “extremely worrying, to put it mildly”.

That revelation was the genesis of her efforts to secure a new bus for the faculty, with the assistance of Professor Trevor McCartney.

Thame said that Toyota Jamaica significantly discounted the price of the Coaster bus, and after submitting a proposal to the CHASE Fund, it agreed to cover the balance of $10 million.

“In this life, we must accept and acknowledge that we are not an island, and our successes are often hinged on partnerships, friendships, and support we receive from persons we meet along our journey,” Thame remarked.

CHASE CEO W. Billy Heaven said that over the years, the fund has spent $259 million on various projects at The UWI.

“We are delighted to have participated in so many ways here, and today is no different. We know that the bus will be used for the intended purpose, we know it will be well maintained, and we look forward to the delivery of good service and better-developed students clinically as they go across the island to carry out their duties and further their career path,” Heaven said.

In his remarks, Toyota Jamaica’s Old Hope Road branch manager, Howard Foster, said that the company always seeks to enrich the countries in which it operates.

“As Toyota moves towards becoming a mobility company, we look forward to the day when Toyota will not just assist those who are able-bodied, but also those who have challenges in terms of movement. We are working on robots, wheelchairs, and automobiles, which will all help those who are challenged to be mobile,” he added.