Jamaica Cultural Center and Museum to open in Georgia 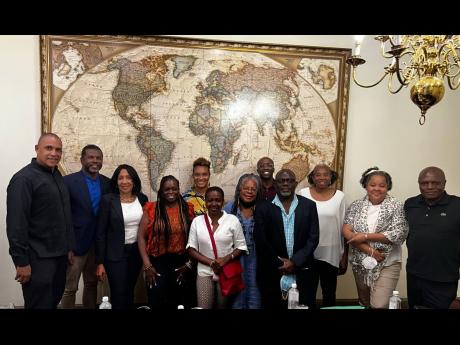 Contributed
Dr Apollone Reid (third left) and Dr David Panton (left) pose with attendees of the advisory board meeting held in Kingston recently. There is a plan to establish a Jamaican cultural centre and museum in Georgia.

The likes of sculptor Basil Watson, late former US Secretary of State Colin Powell and Vice-President Kamala Harris, and reggae superstars Jimmy Cliff and Beres Hammond will feature significantly in the historic Jamaican Museum and Cultural Center in Atlanta, Georgia.

The museum is the brainchild of public policy administrator Dr Apollone Reid, who notes that a 2019 census revealed that more than 44,000 Jamaicans live in the American state.

“It was not difficult getting a group of volunteer professionals who share the same love and vision for Jamaica,” she told The Gleaner.

That team’s aim is to lead the charge of propelling the establishment of a physical structure that will house the museum.

At their first local advisory meeting in Kingston recently, Reid shared that the goal was to compile a history of Jamaica, highlighting the country’s genesis from the Tainos through to the Spanish and English invasions, to rebellions, slave uprisings, and the Maroons. Political party uprisings as well as workers’ unions, religions, and other facets of the heritage are also to be highlighted.

Reid is convinced that the realisation of this vision will create a Jamaican environment that could give visitors from across the globe an opportunity to experience Jamaican history and culture, simply by stopping in Atlanta for a few extra hours in transit to their business destinations.

“Consequently, this could enhance the tourism product of Atlanta and stimulate visitors to the museum with the desire to see authentic Jamaica,” she reasoned.

More important, the physical therapist, who co-chairs the advisory board of executives with Dr David Panton, feels Jamaica’s rich culture and traditions could influence persons of Jamaica heritage in the diaspora who needed guidance to achieve their fullest human potential and be directed away from risky behaviour and poverty.

“I was pushed to act after witnessing the underbelly of the suffering while working in my husband’s dental practice in the underserved area of Atlanta,” she revealed.

Reid is convinced that the outside international influence of Jamaica’s history and culture that would be shared through the museum and cultural centre should serve to influence Jamaicans in the diaspora who have not had the opportunity to experience the resilience that comes with growing up on the island.

And so, the life and history of 100 iconic Jamaicans in various fields will first be showcased on the www.jamaicamuseum.org site, and according to Reid, their transformative contribution to the world will be celebrated.

The Jamaican winners of the Miss World pageant; business leaders such as Canada’s Denny Jolly and billionaire Michael Lee-Chin; and cultural icons such as artistes, poet Orlando Patterson and playwright Basil Dawkins, who have played their part in shaping the world in a unique way, are also among the people to be featured.

“Optimally, we will influence the young generation through mentorship and showcasing of talent, skill, and professional development of the Jamaican success stories and personalities,” said Reid.

The working board comprises eight individuals, who have sacrificed time and resources to establish a foundation from which they can legally operate as a non-profit, stated Reid. The board members also include Christine Marzouca, vice-president; Rohan Budhai; Dr Terrence Foster; Basil Watson; Carol Williams; Raymond Brooks; Tamara Gammon; Lorraine Smith; and Dr Les Johnson.