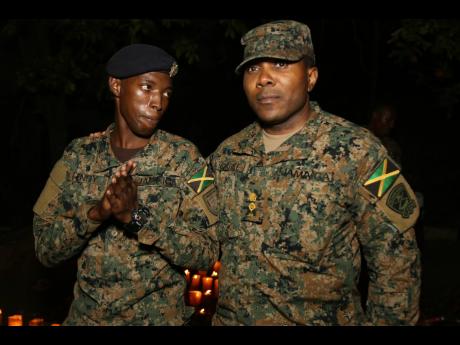 Nathaniel Stewart/Photographer
Lieutenant Colonel Carl Clarke (right) offering support to Private Kishawn Henry at a candlelight vigil in the Clarendon district of Cocoa Piece on Wednesday – just over a week after his son and four others were murdered, allegedly by a relative.

Private Kishawn Henry Sr, whose 23-month-old son was among the five victims of a throat-slashing slaughter on June 21 on New Road in Cocoa Piece, Clarendon, is still finding it difficult to talk about the tragedy without falling apart. As well-...

Private Kishawn Henry Sr, whose 23-month-old son was among the five victims of a throat-slashing slaughter on June 21 on New Road in Cocoa Piece, Clarendon, is still finding it difficult to talk about the tragedy without falling apart.

As well-wishers crammed a street that had been transformed into a carnival of colour, dance, and song, the juxtaposition of the broken father in a solemn moment at Wednesday night’s candlelight vigil was stark.

The 26-year-old Jamaica Defence Force (JDF) soldier is still trying to be stoic in grief but weeps in his most private moments.

The body of Kishawn Henry Jr was discovered inside the home along with his mother, Kemesha Wright, 31; siblings Kimanda Smith, 15, Sharalee Smith, 12; and five-year-old Rafaella Smith. The corpses also bore chop wounds.

Lieutenant Colonel Carl Clarke disclosed that the army was offering firm support for Henry Sr, who is a member of the First Battallion Jamaica Regiment.

“He is one of the persons who I have an open-door policy to. He can just walk into my office at any time just to sit down and cry if he wants to. He has done it; he has just walked into my office and started crying,” the commander said in a Gleaner interview.

According to Clarke, Henry harbours regrets of not telling the children how much he loved them.

“I just sit there and offer him any kind of sympathetic words that I can and also any kind of support we know we will be able to give him,” Clarke said.

Henry has already started the first of a series of counselling sessions that has been scheduled for him.

The JDF private, he said, would have round-the-clock care as they assist him to cope and recover.

Rushane Barnett, a 23-year-old cousin of the victims, has been charged with the murders.

Prosecutors served notice Tuesday that they would be seeking the death penalty.