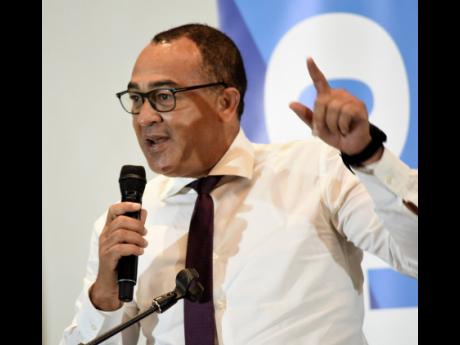 Health and Wellness Minister Dr Christopher Tufton has pushed back against critics of the move to look overseas for additional healthcare workers (HCWs) to assist Jamaica in clearing a backlog of nearly 5,000 elective surgeries. In the same vein,...

Health and Wellness Minister Dr Christopher Tufton has pushed back against critics of the move to look overseas for additional healthcare workers (HCWs) to assist Jamaica in clearing a backlog of nearly 5,000 elective surgeries.

In the same vein, he is urging local healthcare workers to not view the return of the temporary workers as competition who will replace them, but to understand that there is a great need for Jamaica to enhance its capacities, and they will offer well-needed support.

“People ask why and I’ve heard the questions [and] almost the fear by some about how our priorities are misplaced by targeting the return of some of the very people who have been trained here and have gone to settle abroad,” Tufton told The Gleaner on Thursday, noting that 100 healthcare workers in the diaspora have already signed up.

Acknowledging that it was an unusual approach, he said that both the world and the healthcare sector have changed significantly since the pandemic.

Tufton had announced the ministry’s intention to pursue the initiative, dubbed ‘Code Care’, during his Sectoral Debate contribution in Parliament last month, noting that the partnership was necessary to make up ground after local hospitals had to suspend surgeries as priority shifted to dealing with the pandemic over the past two years.

The ministry anticipates that some 400 applicants will join the initiative by the end of the year.

“Healthcare workers are a scarce commodity, not just in Jamaica but the world,” asserted Tufton, who recently toured eight hospitals in Florida, Georgia, Washington, DC and New York in the United States.

Tufton said that all the overseas hospitals which he toured were experiencing a staff shortages, despite having the ability to pay three times more than what Jamaica can afford to give its healthcare workers.

“So those who say that it is because of us why we don’t have the people are not appreciating the extent and the global nature of the problem,” he added.

Tufton further said that the health ministry was taking a “patient-centric approach” in dealing with the concerns and was moving to identify qualified persons to work with local nurses and surgeons to clear the backlog.

Healthcare professionals whose applications have been accepted for the Code Care initiative will travel to Jamaica with the Government paying all expenses and giving them a stipend. The temporary workers will choose between a stay of seven or 14 days with a two-day or four-day rest given, respectively.

These rest days will also be given to local workers.

These surgeries, Tufton said, are ones which will need limited hospital aftercare, unless complications arise.

The ministry will also be using $300 million to repair operating theatres to boost the efficiency of the performances of surgeons and to facilitate longer hours of operation.