Stand Up for Jamaica exec expresses regret at Morgan’s comments 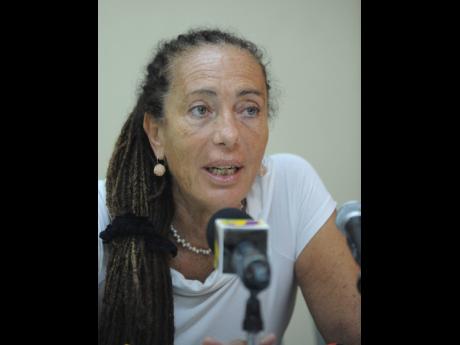 Executive director for Stand Up for Jamaica Carla Gullotta has expressed regret at comments made by Clarendon North Central Member of Parliament Robert Morgan, who suggested that human rights groups have little or no interest in the victims of crime.

Morgan, who is also the minister with responsibility for information, had questioned whether any human rights group had attended Wednesday’s candlelight vigil in honour of 31-year-old Kemesha Wright and her four children – Kimanda Smith, 15; Sharalee Smith, 12; Rafaella Smith, five; and 23-month-old Kishawn Henry Jr – who were hacked to death at their Clarendon home last week.

“None of them is grieving with the family; so my decision is I am with the victims you can gwaan advocate on behalf of criminals, I am advocating on behalf of the people who have been murdered,” said Morgan, charging that human rights groups were not in communities counselling or consoling anyone or even issuing press releases on behalf of the victims.

“I am not saying human rights people are not important because we have some really terrible things that are happening in our society,” he said. “But where is the balance? What about the rights of the people who are victims of criminals defending those rights?”

But Gullotta fired back yesterday, defending the work being done by human-rights lobbies such as the one she leads.

“Stating that we defend criminals, you decided to ignore how much we share pain, how much we deal with it every day with those coming to us seeking help,” she told Morgan in an open letter.

She noted that the murder of a “mother and her four children is the most horrendous crime I can think about. I am a mother of four and that night I felt it, deeply, and tried to call all of them.”

Gullotta said she chose not to go to the vigil “because that family had the right to mourn, to be held tight by its community without any risk that an outsider presence could bring tension and divert attention to rage, to confrontations, while the family and its sorrow was in need of being respected”.

She told Morgan that on a daily basis, human rights groups defend the most vulnerable, including victims who have nobody to help them.

“Stand Up for Jamaica, along the last year, has assisted 190 raped, violated, beaten-up women, offering legal representation, social basic help, counselling and sometimes money out of our pockets,” she said, adding that the group also ensured that the perpetrators were brought before the court.

Further, the rights activist said that her group protects abused children, juveniles at risk, incarcerated mentally ill, homeless, desperate people who cannot afford to pay rent, those who lost jobs and families, or others left behind in loneliness and poverty.

“Victims of crimes, stigmatised and marginalised people, are our daily struggle. We know that what we can do is never enough. For one we can assist, there are many we cannot reach,” she added.

Gullotta reasoned that her group will never be able to individually console five to nine daily victims of murders.

“We can offer our services and our support to those who wish to be assisted. Our commitment is towards everybody and our mandate is towards mercy, not vengeance,” she said in the letter.

“Dear Minister, we need to work hard all together for the defence of rights, it is the only avenue to prevent other bloody, cruel, unacceptable tragedies,” she said.