Family of four loses all possessions as fire destroys home 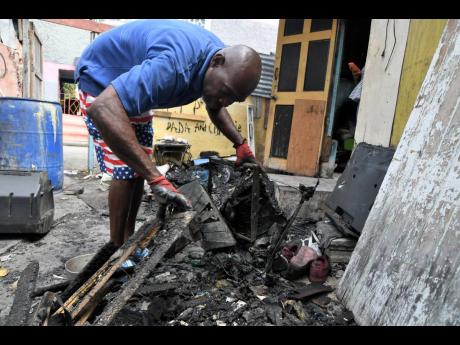 Rudolph Brown/Photographer
Trevor Watson goes through the charred rubble yesterday as he and other relatives began clean-up activities, a day after a fire destroyed their home at 20 Clarence Road in Craig Town in Kingston 12 on Thursday. 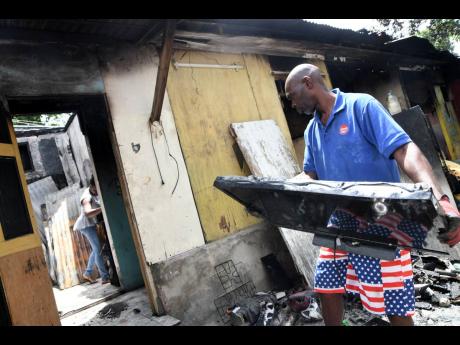 Rudolph Brown/Photographer
Trevor Watson carries a destroyed television set outside as he and other relatives survey losses and try to start the process of picking up the pieces following a devastating fire at their home on Thursday. They four men who lived at the Craig Town home lost all their belongings.
1
2

An overheated hot plate is believed to have caused a mid-morning fire which destroyed a family home in Craig Town, Kingston 12, on Thursday, leaving left four men displaced.

The fire destroyed the roof of the four single-room dwellings and burnt all the men’s belongings.

When The Gleaner visited the scene on Friday morning, the charred possessions were being removed from the home as the family sought to begin their recovery efforts.

Gregory Hall said that he has called 20 Clarence Road home all his life.

He shared that he was born in the third room 50 years ago and then his mother was taken to Victoria Jubilee Hospital for medical attention.

“A lot of possessions have been lost and there is just a sad feeling because of all the many memories we have had over the years. It’s traumatic and it’s really devastating for us as a family,” he said in a low tone.

Hall told The Gleaner that he got a phone call that his home was on fire while he was at work in St Thomas. He extended gratitude to the residents who assisted with putting the fire and preventing it from spreading to another property.

“My brother-in-law is a technician, so he had other people’s property that he was fixing. My cousin did his laundry yesterday, so a lot of his clothes were on the line. My younger brother lost everything, and I also lost everything,” Hall said, estimating the losses to be in the millions.

Fifty-six-year-old Trevor Watson, Hall’s brother-in-law, has been living at the home for 15 years. At the time of the fire, he was also working in St Thomas.

“My nephew was using a hot plate and di wire dem get hot and start melt. He wasn’t in the room at the time and when him come, him a try out it by himself a throw water on it. Him never run go out a road guh call fi fire. A long after dem realise and see di room a blaze, and by time dem call the fire truck, it was too late,” he explained.

Watson lost all of his belongings as well as four television sets, amplifiers and monitors belonging to his customers. He has since reached out to some of his customers explaining the situation, and so far, they have been understanding.

Watson shared that his 20-year-old son was inside sleeping and was woken up by the warmth of the fire.

“When him get up, him see the fire in the ceiling and just grab up him game and run come out,” he said.

Among the items he lost are a refrigerator, settee, TV, microwave, blender, furniture and clothing.

Watson said he had to borrow a shirt from his son to wear on Friday and since the fire, he has been staying at his babymother’s house.

“When me done now, me haffi go rinse out these and get them dry to put on again until I get some clothes. Me nuh sleep last night. Everything just deh pan mi mind. When yuh work and buy yuh things and see it go up in flames and have to start over again, it is hard, but the greatest thing is life,” Watson said.

The family’s immediate needs are clothes, food and financial support to assist with the rebuilding process.