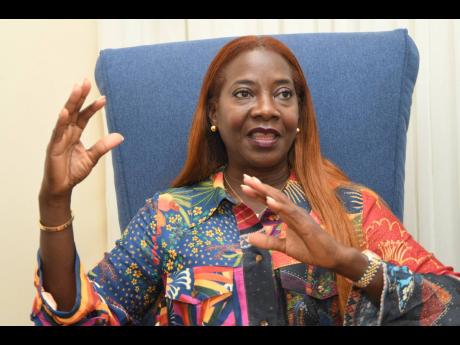 File
Jamaica-born New York nurse Sandra Lindsay, who was the first person vaccinated against COVID-19 in the United States.

Jamaica-born nurse Sandra Lindsay is among 17 people to be conferred with the Presidential Medal of Freedom – the North American country’s highest civilian award – by President Joe Biden at the White House next week.

The Jamaican, who works in New York City, received the first dose of the COVID-19 vaccine administered in the United States in a televised event in December 2020 and has since been campaigning for more people to roll up their sleeves and take the jab as the fight against the pandemic continues.

Nurse Lindsay said that she is elated to be named among the honorees.

“I am incredibly honoured to be receiving this prestigious award. I consider it an honour not only for myself but for nurses, healthcare workers, women, women of colour, and immigrants in general,” she said.

Lindsay said that the award puts the spotlight on nurses who work tirelessly and put their lives at risk to serve people.

The Presidential Medal of Freedom is presented to people for meritorious contributions to the security or national interest of the United States. It is also awarded to people who promote world peace, for cultural and other significant public-private endeavours.

Honorees are selected by the president or from among people recommended to him by the Distinguished Civilian Service Awards Board.

The Presidential Medal of Freedom is distinct from the Medal of Freedom, an antecedent award issued prior to 1963 to honour US civilians’ contributions to World War Two.

Lindsay joins the late General Colin Powell, who received it twice, as the Jamaicans to have the been bestowed with the honour.

With more than 26 years of nursing service, Lindsay currently works as a critical nurse at Northwell Health Hospital. She was responsible for leading a team of nurses in some of the hospital’s sickest COVID-19 wards.

The White House announcement of the honorees said that they “have overcome significant obstacles to achieve impressive accomplishments, dedicated their lives to advocating for the most vulnerable among us, and acted with bravery to drive change in their communities and across the world while blazing trails for generations to come”.

Biden himself is a recipient of the honour, having been awarded by then President Barack Obama in January 2017. Obama saluted Biden’s public service as a long-time United States senator and vice-president by awarding him a Presidential Medal of Freedom a week before they left office.