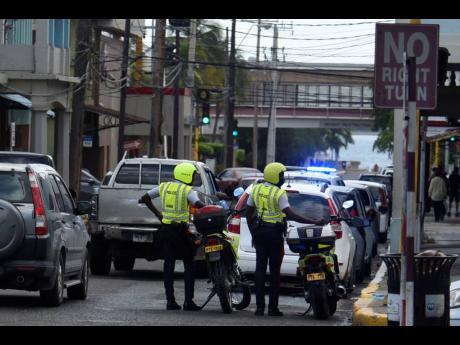 File
The SSP is a national security-critical undertaking, with specific objectives to train police officers on the use of technology in crime-fighting; increase the proportion of police investigations of murders that result in prosecution; and reduce the rate of murders in the country.

It appears the Government provided incorrect information to The Sunday Gleaner on the US$20-million Security Strengthening Project (SSP) that is being funded by a loan from the Inter-American Development Bank (IDB).

Contrary to what was stated by the Government, the IDB has said there is no salary-cap clause in the loan agreement it signed with Jamaica.

After several weeks of delay, the Ministry of National Security responded to Sunday Gleaner questions just over a week ago, noting, among other things, that a lean Project Executing Unit (PEU) was established pursuant to the terms of the negotiated agreement that “administrative expenses would not be greater than four per cent of the value of the loan”.

The payment of salaries to office staff is usually classified as an administrative expense.

But the IDB has categorically stated that no such salary cap clause exists.

Section 3.02 of the loan agreement addresses the PEU referenced by the ministry.

“Notwithstanding the provisions of paragraph (a) of this section, expenditures that meet the requirements of its subsection (i) and (iii), related mainly to the PEU staffing, change management, training, rent and equipment, up to the equivalent of Seven Hundred and Fifty Thousand Dollars (US$750,000), may be recognised by the Bank as Eligible Expenditures, provided that they have been incurred between August 28, 2017 and November 22, 2017,” it read in part.

National Security Minister Dr Horace Chang and Courtney Williams, permanent secretary in the ministry, have not responded to a Sunday Gleaner email seeking to ascertain whether the ministry had erred in saying there was a four per cent cap on administrative expenses in the loan agreement.

The ministry also revealed that the project director, whose contract was not renewed, was paid just over $51 million. When that figure was added to the $370.6 million the ministry described as “other salaries and consultancies”, the total spent was approximately $421.6 million.

According to the IDB, the Government is not in breach of the loan agreement.

“In regard to the Security Strengthening Project (SSP) the Inter-American Development Bank (IDB) finances in Jamaica, we would like to state that there has been no breach of the loan agreement signed between the Government and the IDB. This project continues to be a priority for the bank, and we will keep working closely with the Government on this important topic for the country, as extensions are common on development projects and decisions are made on a case-by-case basis,” the bank noted.

It also confirmed that discussions are under way regarding a potential extension of the SSP, which has been affected by the COVID-19 pandemic and delays in the procurement process.

“As stated previously, we are working closely with the Government and no agreement has been reached yet. The deadline for agreeing on an extension is the original disbursement expiration date, which, in this case, is February 2023,” the IDB said.

The bank also noted that if an extension was not agreed to by then, it would no longer be able to disburse funds towards the project.

The SSP is a national security-critical undertaking, with specific objectives to train police officers on the use of technology in crime-fighting; increase the proportion of police investigations of murders that result in prosecution; and reduce the rate of murders in the country.