Flood victim Jenell Walters had ambitions of being the next Portia 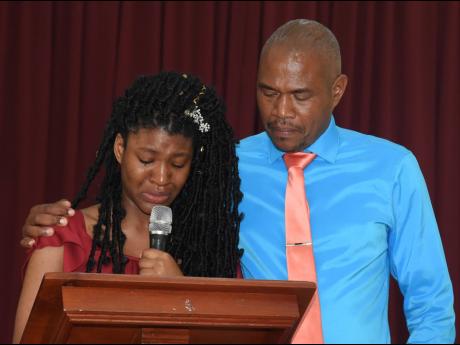 Ashley Anguin/Photographer
J’Andra Walters, cousin of 12-year-old Jenell Walters, is consoled by her father Gregory Walters after breaking down in tears while giving her tribute at the thanksgiving service held at the Kings Seventh-day Adventist Church in Mount Salem on Sunday 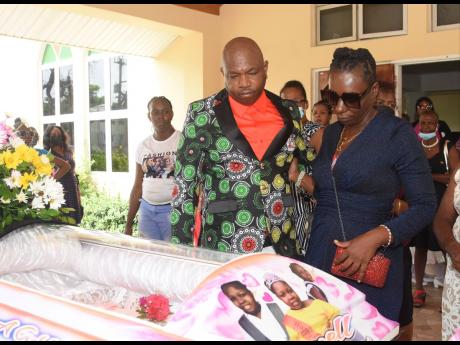 When all the other students in Jenell Walters’ class chose careers in medicine, law, education, policing, the 12-year-old credited with having the mind of a scholar would always answer: “Portia. Teacher, I want to be Portia.”

And with that she was given the moniker – after Jamaica’s first female prime minister, Portia Simpson Miller – from her teacher at Success Preparatory months before flood waters in Montego Bay took the lives of the preteen and her grandmother Beryl Walters on April 19.

They died after heavy rain washed the car in which they were travelling into the Montego River. Jenell’s grandfather, Berris, and aunt, Shannon, were rescued from the onslaught of the flood.

Beryl’s body has never been found.

On Sunday, the Kings Seventh-day Adventist Church in Mt Salem, St James, was packed with well-wishers, family, educators, friends, and classmates who paid tribute in honour of the youngster, who some predicted was on the path to becoming a prime minister herself. The congregation included Jenell’s parents and three sisters.

An ‘A’ student at the Montego Bay High School and a youth teacher at St James Preparatory, where she assisted students sitting the Primary Exit Profile exam, Jenell’s resume was already running out of space.

She had already written 18 poems, was a budding lecturer and lover of music, an embracer of the arts, and a dreamer with big ambitions of owning her own home. But she still nurtured the desires of a child, including a love of her mom Christine Gilbert’s cooking.

And her seventh-grade peers at Montego Bay High said she was a fan of anime.

Sixteen-year-old J’Andra Martin, a cousin of Walters’, had the congregation in tears in her remembrance, stating that Jenell meant a lot to her.

“I still can’t believe you have vanished from my life,” she lamented, just before breaking down and being assisted by her father, Gregory. “I am really sorry. May the Lord guide you through your pain,” she told Gilbert, who wore sunglasses throughout the ceremony.

But it was Dr Julian Walters, Jenell’s aunt, who had the attention of the church.

“For those of us who knew Jenell, we can attest to the fact that she was an astute, exceptional, brilliant, and studious student who took great pride in her schoolwork. Jenell was an independent learner who had a photographic memory, one which could be compared to that of an elephant,” she said.

When Jenell started attending Happy Heart Pre-School, she was performing above her grade level, said Dr Walters, and teachers there were reportedly shocked by her assertiveness and chutzpah.

“If you knew Jenell, you would have known that she was easily bored, and so her attention had to be facilitated with extra learning materials that could challenge her. Ms Headley could have written a book about Jenell during her time at Success Preparatory,” Dr Walters said of Jenell’s grade one teacher.

A memorial service will be held for Beryl Walters on Wednesday, July 6.