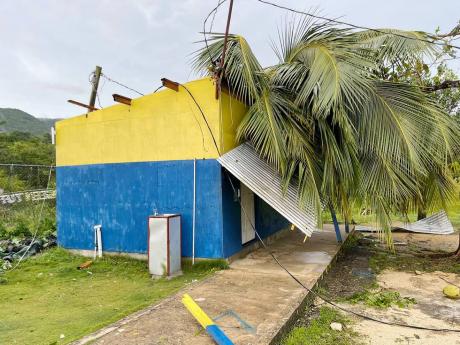 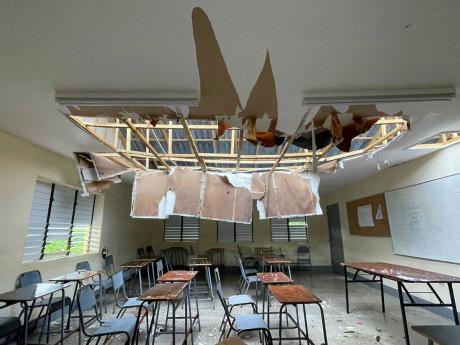 Contributed
Aberdeen High board Chairman Anthony Foster is hopeful that repairs will be completed before the start of the new academic year. 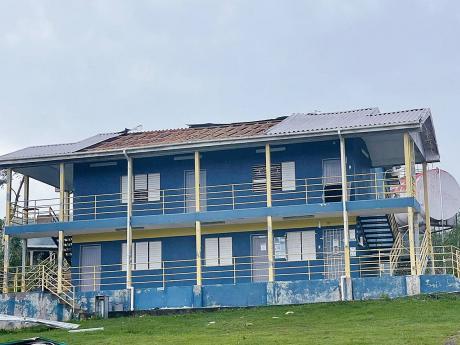 Contributed
The roof of this block at Aberdeen High was badly damaged by the freak storm on Saturday.
1
2
3

A freak storm that damaged sections of Aberdeen High School in St Elizabeth at the weekend has rallied a spirit of resilience among faculty, past students, and residents of the northeastern St Elizabeth community amid relief that no one was injured.

Anthony Foster, chairman of the school board, said that the storm tore through two buildings and damaged sections of the school’s fencing around 1 p.m. Saturday.

“We lost about one-third of the roof from two classrooms, a building that houses the principal’s office, and the library. A building that people know as the principal’s cottage, the entire roof of that building is destroyed, and there are several fallen trees, mostly coconut trees, across the school grounds,” Foster said in a Gleaner interview.

“A door to one of the classrooms was broken into two pieces, and this was a door that was locked. I figure that because part of the roof was blown off, the breeze would have taken that door from the inside, causing it to break the way it broke,” Foster added.

In addition, the school’s tuck shop, which was made out of plyboard, sustained significant damage when its roof was torn off and a coconut tree fell on to the structure. However, the school’s older classroom blocks were spared the wrath of the storm.

The disaster unfolded one day after the end of the academic year on Friday. More than 200 students had still been attending classes on the compound as the school term closed.

Foster praised the unselfish efforts of staff and community members who were out in their numbers surveying the scale of damage and cleaning up as much of the wreckage as they could up to Sunday afternoon.

Damage is estimated to be approximately $10 million, but further assessments are to be done.

“The guidance counsellor, two agricultural science teachers, and the physical education teachers came to assist here. Some of them are not even from our community, but they heard about the disaster and came, and they were doing their little thing to try and get things back to a position where we are a little bit safer,” said Foster.

“It shows the commitment we have from staff at our school.”

With fallen power lines “all over the school”, an electrician was deployed Sunday to disconnect electricity to some buildings because live wires were on the ground. The electrician, who is from the community of Aberdeen and is also a past student, turned up to offer assistance when he heard of the incident.

It is also understood that the school has reached out to Delroy Slowley, member of parliament for St Elizabeth North Eastern, for assistance.

Foster is hopeful that the repairs will be completed before the start of the 2022-2023 school year in September.

“We are not at a significant disadvantage, but we are already a small school, we are already struggling for space and hoping to get more space very soon, and with damage to two classrooms and offices, we can consider that damage to be significant,” said Foster.