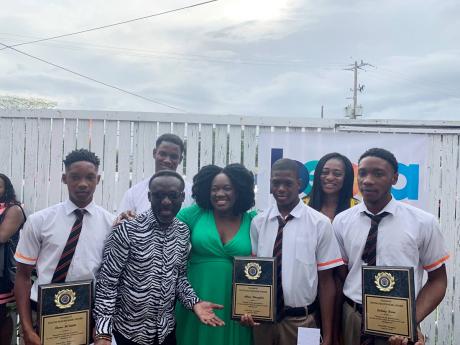 For Claudia Reid’s son, standing up for what is right is nothing new.

So she was unsurprised to learn of his decision to separate a Tivoli Gardens High schoolteacher and a 16-year-old boy student involved in the June 6 classroom brawl that could have also got her own son hurt.

“Him always love to part fight, and him take it from him mom, because him mom love peace ... . I don’t like the violence and war,” she said.

The incident was captured on camera and has been widely shared on socia-media platforms.

The matter is now before the Family Court, with the teenager charged with assault and destruction of property.

On Sunday afternoon, the Optimist Club of Trench Town and BECCA Foundation honoured Reid’s son, Daeshawn Tate, and three other schoolboys as “peacemakers” for their efforts in putting an end to the altercation.

The four boys each received a plaque from the club, scholarships worth $25,000 each towards the next academic year, and meal vouchers from Popeyes, Burger King, and Little Caesars restaurants.

The club’s president, Owen ‘Blakka’ Ellis, told The Gleaner that when he first watched the viral video, he realised that no one in the comments sections of the various social-media platforms had acknowledged the four students who helped to break up the scuffle.

He said he was so disheartened by that omission that he thought it fitting to reward the boys for doing the right thing.

“I’m sure these four men thought that nobody saw them. They only saw the fight ... [but] we have to create different narratives,” he said.

The Trench Town native said that the words of late broadcaster and playwright Barbara Gloudon – “poverty don’t mean dirt” - had an impact on his life. He, therefore, wanted to have a similar influence on young people.

Accordingly, the actions of the four peacemakers have inspired the club to annually award youngsters for good work in Trench Town community around this time of year, right before going back to school.

“As Optimists, we really try to promote the idea of optimism, of seeing the good in negative situations. So we try to encourage people to really defocus the negatives and give attention to the positives,” said Ellis, himself a theatre practitioner.

Janice Skeine, mother of Zachary Skeine who was also awarded, said she was comforted in the knowledge that her son was able to defuse “a fight that shouldn’t have happened”. She said that she was elated that he was awarded and that she “really appreciated that somebody saw something different from the video”.

Akon Douglas, one of the four boys, told The Gleaner that he heard the uproar from his class next door and decided to intervene because the teacher involved was one of his favourite at school.

Douglas, who is also friends with the 16-year-old involved, explained that he was upset that the incident had escalated into a physical altercation.