NO CLASSES FOR 2 YEARS 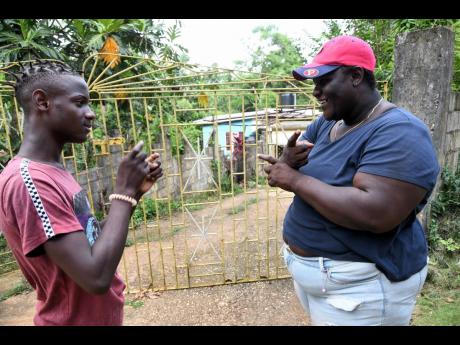 Rudolph Brown/Photographer
Anna-Kay Williams communicates through sign language with her 16-year-old son, Rolando Grant, who has never had a birth certificate. Rolando, who is deaf, has not been in face-to-face or virtual classes for two years. 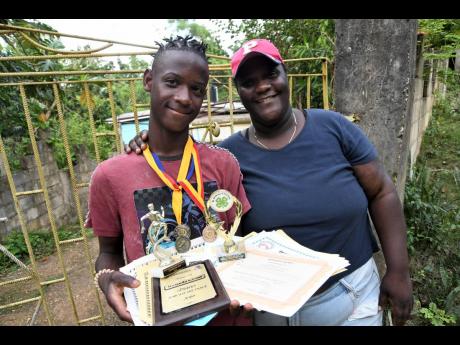 Rudolph Brown/Photographer
Accompanied by his mom Anna-Kay Williams, Rolando Grant shows off his medals and certificates.
1
2

Sixteen-year-old deaf student Rolando Grant has missed out on in-person or virtual classes for two years – victim of a back-and-forth squabble over a birth certificate that has never been issued.

That has clipped the wings of the aspiring pilot, who also cherishes hopes of working in information technology or becoming a farmer.

Grant appears to be among the 20,000 students who are still in limbo since the coronavirus pandemic caused the mass shuttering of schools, pushing the most vulnerable to the margins.

The number of so-called missing students has gradually declined as normality returned to the education system, but the case of the disabled boy now living in Victoria Canal, Linstead, shows how schoolchildren can fall through the cracks.

The revelation by The Gleaner sparked a sharp retort by Education Minister Fayval Williams, who has insisted that “no school has a right to bar any child”.

Grant last attended Lister Mair Gilby High School for the Deaf in March 2020 as a grade nine student when the COVID-19 pandemic hit.

His mother Anna-Kay Williams said that Grant, who was born at Linstead Hospital in St Catherine on May 6, 2006, was barred from continuing studies online because he lacked a birth certificate. He had been attending the school all along since grade seven.

The mother shared that her son was doing well academically at high school before the pandemic, with science being his favourite subject.

“I am an active parent and he’s an active child in school, so why kick him from school because of a birth paper?” Anna-Kay said.

However, principal of Lister Mair Gilby High School for the Deaf, Stacy-Ann Dockery, denied the claims made by Grant’s mother, saying he initially had online access for a few days before the dispute escalated.

“We are here to serve students who are deaf – students with disabilities. Even if the student is not registered and the student shows up online, why would we block a student from accessing education?” the principal said.

“This is a matter of the mother not cooperating with what the school has requested of her,” Dockery told The Gleaner on Tuesday.

Williams had also alleged that her son was denied a tablet when the school shifted to remote learning because of the COVID-19 outbreak, explaining that she received a device after appealing to seasoned members of the deaf community,

The principal said that the school received tablets through the Jamaica Council for Persons with Disabilities (JCPD). Only students duly registered with JCPD were qualified to receive a device.

“We also received tablets from the Ministry of Education and students had to be registered to receive those tablets. We tried to get social service on the case and they tried to reach out to her on several occasions to come to register the child. They tried to assist her otherwise but she still did not respond,” Dockery said.

Dockery and the child’s mother said the school’s guidance counsellor had reached out on several occasions since 2020, enquiring about the student’s attendance and the efforts being made to secure the birth certificate.

The school’s secretary outlined that a birth certificate, immunisation card, two passport-size photographs, and a completed medical form are required for registration.

“The parent did not come in to register the child. We just accidentally found out that the child was coming to school not registered,” the secretary said.

However, his mother has countered those claims, explaining that at least three times she took the requested documents to the school, with the exception of the birth certificate, and was told that she should return with them when she acquired the official certificate.

But the tug of war that has left a child unschooled for two years is especially troubling to the education minister, who has floated the establishment of a hotline at the ministry for unresolved cases like that of Rolando Grant.

“They’ve tried with the particular government entity and every step of the way, they’re unsuccessful. We at the ministry need to help those parents navigate all the different entities that they need to go to for the information for their child, because we don’t want a child to be out of school just because they don’t have a birth certificate,” Williams said in a recent Gleaner interview during the launch of a final-year exhibition at the Edna Manley College of the Visual and Performing Arts.

“If that child was born in Jamaica, there has to be some record, whether church record, baptismal record, people in the community, something must exist about that child if that child is in Jamaica,” she said.

Williams said the Yard-to-Yard programme, in which personnel were deployed to track down children who have vanished from schools, would be paused for the summer holidays but will be re-engaged at the beginning of the new academic year in September.

At the worst moments of the pandemic, 400,000 students were without a device or lacked access to the Internet and more than 100,000 could not be located when face-to-face classes resumed nationally.

The Rolando Grant episode also turns the spotlight on the bureaucracy in which the issuance of birth certification can become enmeshed.

Williams said she tried to get her son’s birth certificate when he was much younger but admitted that she became laid-back about the situation after failed attempts.

The mother got the entry number for the birth certificate from the Registrar’s General Department (RGD) and previous schools he attended had accommodated him with that preliminary code.

He first attended Jamaica Association for the Deaf Pre-School and received primary education at Danny Williams School for the Deaf.

Williams told The Gleaner that it has been a back-and-forth ordeal with Linstead Hospital to get the birth certificate.

After his birth, the family resided in St Thomas. There Williams realised that when she often called Ronaldo’s name, he never responded.

“I had to try loud things to see if he could hear, and I used pot covers,” she recounted.

His mother underscored that though she has engaged him in educational activities, he has suffered significant learning loss because of the absence of professional tutelage.

“Sometimes I ask him to spell little words or to do a maths problem that he loves and he tells me that he doesn’t remember. The only thing he can remember is science – he always holds that in his head, but for maths and language arts, he’s not remembering, so I want him to go back to school,” Williams said.

She told The Gleaner that her son has been working as a farm assistant over the past two years.

Communicating by sign language with his mother as interpreter, the student, too, said he wants to return to school badly.

“I miss my friends. I miss subjects like maths and language,” he said.

Having finally received the notification of birth in a public institution from Linstead Hospital on May 10, Williams now needs to submit it along with a completed late registration of birth form to the RGD, in order to apply for the birth certificate.

Williams said the cost is $10,000 and she is seeking assistance to pay for the well-needed document.