Some parents spurn summer lessons, opting for kids to work

... but foundation determined to press on despite disappointment 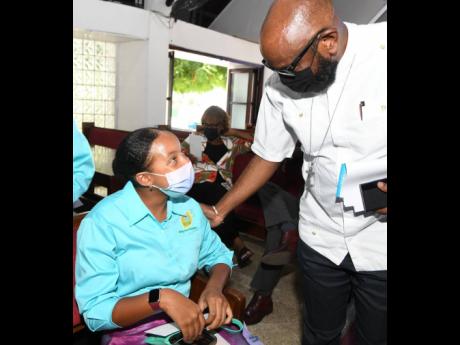 Rudolph Brown/Photographer
Imani-Leigh Hall, founder of ILAH’s Lemon-Aid Stand for Kids Foundation, chats with the Reverend Astor Carlyle, pastor of the Webster Memorial Church, at the launch of the foundation’s 2022 summer camp at the Half-Way Tree Road-based church on Monday. 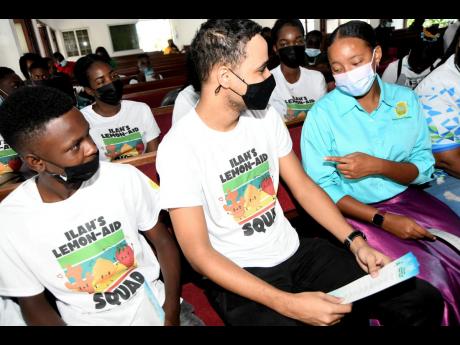 Thea-Nicole Davis was heartbroken when some parents told her that despite their children being in dire need of remedial attention, they would not be sending them to a summer education programme she initiated for needy youth. Davis had invested time...

Thea-Nicole Davis was heartbroken when some parents told her that despite their children being in dire need of remedial attention, they would not be sending them to a summer education programme she initiated for needy youth.

Davis had invested time in her 13-year-old daughter Imani-Leigh Hall’s dream, but the reality hit her that there were thousands of children not attending extra classes to get the additional help they needed to improve their academic performance.

The ILAH’s Lemon-Aid Stand for Kids Foundation Summer Programme was born after Imani-Leigh first started selling lemonade five years ago to begin her charity while she was eight years old.

Her most recent charitable lemonade sale took place at Kingston Kitchen, which was held on the grounds of the Hope Botanic Gardens in St Andrew last Saturday.

The summer school programme was launched at the Webster Memorial United Church on Half-Way Tree Road on Monday with the initiative extending to even St James and Manchester.

Despite providing lunch, some of the engaged parents, especially those living in Lucea, Hanover, and Linstead, St Catherine, still refused to send their 11- to 14-year-old children out on Monday because they either could not afford the transportation cost or they wanted the children to work with them in their respective fields.

“It was interesting and heartbreaking. A lot of our applicants, when you reached out to them and the guidance counsellors and the teachers reached out to the parents, the parents some are willing, but they’re [also] happy for the six-week [summer] break of not having to find money to send their child to school,” Davis told The Gleaner.

“They say to me, ‘Ma’am, mi know mi child need help, but guess what? School done and dem affi come help mi ina mi shop or dem affi come help mi do ‘X’ because dem have to meet their everyday needs’ and they look forward to summer where their child can come out to assist them to make some extra money,” she said.

Nonetheless, Imani-Leigh is happy that her summer school idea has come to fruition and will extend its wings beyond the Corporate Area.

“I’m extremely excited to see how we can impact the lives of the children who aren’t able to participate in online learning and it’s kind of exciting to help children my age, because I’m used to helping children younger than me, and I kind of know what they’ve experienced, and I think it will get easier for me to get an understanding of how they feel,” the St Andrew High School third-former told The Gleaner.

At age eight, Imani-Leigh’s passion for outreach was ignited after her grandmother, Joan Young Davis, took her to children’s homes.

She then pitched the lemonade stand the following Labour Day to raise funds to buy toys for the children at Maxfield Park Children’s Home.

“I put it out on my social media page and people came – friends and family – and I think she earned about $25,000 just from that initiative,” Davis told The Gleaner.

Since then, they started to stage small pop-ups.

During one such pop-up, a lawyer who purchased drinks encouraged them to register as a business or charity and assisted them with the process.

“There is a saying that goes ‘If you want to go fast, go alone; but if you want to go far, go together’, so, when ILAH’s Lemon-Aid Stand reached out to us with this idea, it could have not been a more perfect pairing. This 13-year-old girl, Imani-Leigh Hall, and her board had already developed the perfect formula. She just needed help sourcing the ingredients, which we had,” White said at the launch.

Sagicor will also be providing personnel, material and other input as required over the next three weeks, White said.

Students significantly affected by the pandemic are being targeted for the summer camp, most of them recommended by their guidance counsellors.

Fridays will be dedicated to honing their social skills.