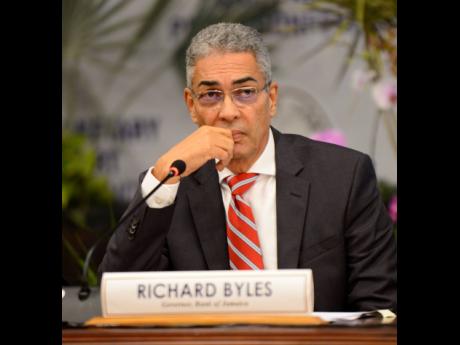 File
Bank of Jamaica Governor Richard Byles is standing up to critics of the central bank's policy of rate hikes.

Likening the economic climate to a Category Five hurricane, Bank of Jamaica (BOJ) Governor Richard Byles has doubled down on the central bank’s position to continue hiking interest rates despite mounting criticisms from the business community.

Byles and his team of Senior Deputy Governor Wayne Robinson and Deputy Governor Robert Stennett were before Parliament’s Standing Finance Committee on Tuesday for a review of the BOJ’s quarterly monetary policy reports.

There has been strong pushback from business leaders to the central bank’s adjustments of its policy interest rate, which has caused borrowers to face higher costs.

Last week, the bank again raised its rate by 50 basis points to 5.50 per cent per annum.

That marked the seventh adjustment by the BOJ in months as it seeks to rein in inflation, which was estimated at 10.9 per cent as at May 2022. The BOJ’s target range is 4-6 per cent.

Byles argued that it was better to shoulder the weight of the high interest rate cost with a more stable exchange rate than to have the burden fully placed on consumers.

“In the United States, they have not had inflation like this for 40 to 50 years. This is a Category Five hurricane that we’re enduring and trying to survive,” Byles said during the sitting.

“There is a price to be paid at some point, but it is for the greater good. Until someone can convince me that had we done nothing, had we left interest rates low, that we would be better off, then I believe we are in a better place than we may have been had we not pursued the policies that we have,” he added.

The governor said the BOJ has agonised over moving interest rates from 0.5 to 5.50 and is further strained in its deliberation on whether to go further.

Byles said that the central bank remains hopeful that commodity prices will ease in the second half of 2022 amid projections by international experts.

“If that happens, it will allow our inflation curve to turn the corner and start to head down. When we see that and when we see core inflation start to come down, then we will be in a better position to determine whether we pause or not,” the BOJ governor said.

However, the country’s private sector has warned that the BOJ’s policy runs the risk of triggering an economic recession by pushing the price of basic food out of the poor’s reach.

Byles said gross domestic product (GDP) growth for the 2022-2023 financial year should hover in the region of 2-4 per cent.

Much of that amelioration has been credited to recovery to pre-pandemic levels.

Byles said that tourism has shown strong recovery and should drive growth if this trend continues.

Additionally, he said the return of the Jamalco bauxite refinery to active production would also be an economic fillip.

“These are export sectors that don’t suffer any effect from domestic interest rate. So, we expect that the external sector, our export sector, will be robust and strong and help to drive growth in 2022-2023,” he said, responding to a question on whether the BOJ’s policy could cause a recession.

The central bank head said the likelihood of a recession is low, drawing on the International Monetary Fund’s outlook for the US economy to support his position.

The international lending agency has indicated that it does not see a recessionary environment in the North American country in the near future.

“They noted that if a recession was to occur, however unlikely it may be, it would be relatively short,” he said, citing the country’s federal reserve forecast of a 1.5 to 1.9 per cent growth for this year.