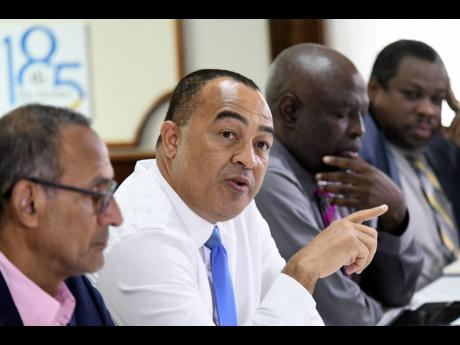 Buffeted by criticism about chronic machine breakdowns and overlong downtime for repairs, the Ministry of Health and Wellness is exploring the option of leasing medical equipment for the public sector instead of making purchases. That consideration...

Buffeted by criticism about chronic machine breakdowns and overlong downtime for repairs, the Ministry of Health and Wellness is exploring the option of leasing medical equipment for the public sector instead of making purchases.

That consideration marks an admission by the Government that it does not have the technical capacity for efficient maintenance, leaving thousands of public-sector clients waiting for weeks or months for intervention..

“The first time the equipment breaks down, it ends up in a corner somewhere, and sometimes even when you have extended services, you have to send to Germany for the person to fly to Jamaica, and it just creates all sorts of problems,” Dr Christopher Tufton, the portfolio minister, said during a Gleaner Editors’ Forum on Tuesday.

One such example was in September 2021 when the linear accelerator (LINAC) used by radiation patients at the National Cancer Treatment Centre, located at St Joseph’s Hospital, was out of commission.

“The machine breaks down from time to time, as with any machine, and we do not have the capacity locally to repair it,” regional director for the South East Regional Health Authority, Errol Greene, had told The Gleaner.

Tufton made the disclosure shortly after Opposition Spokesman on Health Dr Morais Guy had expressed concern about the state of the equipment in Jamaica’s hospitals.

“The deficits in the hospitals now as it relates to functioning of the CT scanners, X-ray units and ultrasound machines. I know they have gotten donations and gifts but we still have major hospitals which do not have the major facilities in operation,” Guy said.

He noted that Cornwall Regional Hospital is in need of an X-ray unit, as only portable ones are being utilised, and those do not allow for detailed studies.

Guy explained that patients have to be sent off-site under the ministry’s public-private partnership to get X-rays conducted.

Tufton added that the ministry is trying to standardise the arrangements where, for example, mammography units or CT scan machines are leased with a contract for servicing.

“They are responsible for either being mobilised here or training the skill sets to be mobilised for servicing, so we get the optimal usage out of it. Many countries do it, and it’s something we’re looking at,” the minister said.

However, he said there are some areas of equipment maintenance that are not amenable to leases.

“What I think is worth pursuing as well is improving not only the numbers and the funding for the biomedical departments in the hospitals but their overall organisation,” said James.

“There is a huge problem, and I call our biomedical units purgatory because all of our machines just go there after they’ve died to wait to see whether they are going to heaven.”