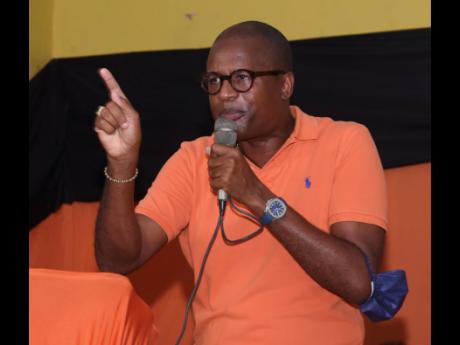 File
Ian Hayles has been accused of not moving with expedition in the lawsuit blocking the tabling of a contractor general’s report.

More than five years after former parliamentarian Ian Hayles filed a suit barring the Integrity Commission from tabling a report in Parliament from the then contractor general, the former lawmaker is being accused by the anti-corruption body of being lethargic in pursuing the court matter.

Hayles filed the suit in March 2017, effectively stopping the Parliament from tabling a report from the then contractor general in respect of an allegation that the former lawmaker constructed a building in Hanover without receiving the requisite approvals.

The People’s National Party (PNP) politician had sought leave to apply for judicial review with a view to obtaining various orders, including an injunction to prevent the tabling of the report.

Hayles was nominated Tuesday for one of the vice-presidential posts in the PNP.

Chairman of the Integrity Commission, retired Justice Seymour Panton, noted in the commission’s annual report that the matter was before the Supreme Court and that he would not comment on the merit of the suit.

However, Panton said that the claim is not being pursued by the claimant with any urgency.

The Integrity Commission chairman said that the matter has now been fixed for hearing on November 2 and 3, 2022, before Chief Justice Bryan Sykes.

“If the claimant is still not ready to proceed in November, the commission’s attorneys-at-law will be instructed to move immediately for the claim to be struck out,” Panton declared in his remarks contained in the annual report tabled on Tuesday in Parliament.

“Five and a half years is too long a time for a matter of this nature to be still pending. It is reasonable for the public to have been expecting that the claimant would have been chomping at the bit to have this matter determined by the court,” he stated.

Efforts to contact Hayles on Tuesday were unsuccessful, as calls to his cell phone went unanswered.

On another matter, Panton sought to dismiss a reported claim by Rovel Morris, the chief executive officer of the St Ann Municipal Corporation, that he had been exonerated by the Local Government Services Commission of any wrongdoing in relation to the installation of a charging port at the local authority.

Panton said that on seeing the media report, the commission sought and received comment from the Local Government Services Commission on the matter.

Providing the “true position” on the matter, Panton said that Morris was summoned to a meeting of the Local Government Services Commission. He said that at the meeting, it was “strongly recommended to (him) to be prudent and practise proper administration as the chief executive officer and accountable officer of the corporation”.

“I would advise him that he is mistaken to think that he has been exonerated,” Panton added.

The charging port was installed for use by former Mayor Michael Belnavis to charge his electric vehicle.

The Integrity Commission had recommended in January that Morris be sanctioned for authorising the installation of a 220-volt charging port at the St Ann Municipal Corporation so Belnavis could charge his Porsche Cayenne hybrid motor car.

Panton urged public officials to professionally discharge their duties with honesty and to shun corruption.