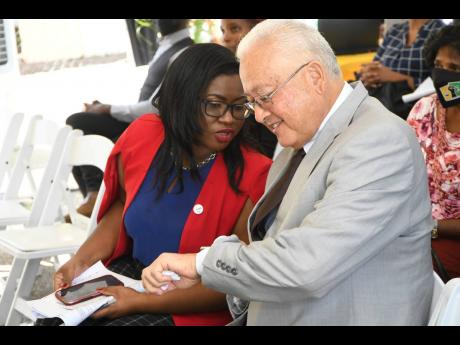 Rudolph Brown/Photographer
Mickel Jackson, executive director of Jamaicans for Justice, in conversation with Justice Minister Delroy Chuck at the launch of the human rights lobby’s Justice for All campaign at Grants Pen Peace Park on Grant Pen Road in St Andrew on Thursday.

Yvonne Lee, whose son Matthew Lee was slain by the police almost a decade ago, is urging the Government to give urgent attention to reforming the country’s justice system.

Lee said that since the tragic loss of her son in January 2013, she has been “waiting in vain for justice”.

Matthew Lee, Mark Allen and Ucliffe Dyer were shot by cops along Acadia Drive in St Andrew on January 12, 2013 under questionable circumstances. Six cops – Sergeant Simroy Mott, Corporal Donovan Fullerton, and Constables Andrew Smith, Sheldon Richards, Orandy Rose, and Richard Lynch – were charged in August 2019 for their deaths. They claimed that they acted in self-defence.

Fullerton was further charged with making a false statement to the Independent Commission of Investigation after being accused of misleading the police oversight body about his use of lethal force during the incident.

The matter is still before the courts.

“We have been waiting. It happened in 2013 and now it’s 2022 and we haven’t received justice yet,” Lee said during the launch of Justice for All, a three-year campaign spearheaded by Jamaicans for Justice (JFJ).

Lee, who is also a JFJ board director, encouraged victims to speak up in their quest for justice.

“Don’t fear. I know that sometimes there are reprisals and many of the victims that come from the inner-city communities fall prey to abuse by the security forces. You don’t have to fear. We went live on TV and aired our case and it went international and we got publicity from Amnesty International,” she said.

The board director also urged the Government to implement the recommendations outlined in Amnesty International’s November 2020 report.

Among the eight recommendations made were the strengthening of police training to focus on communication, de-escalation and prevention of situations in which there might be a need to use force, and to urgently reform the criminal justice system to ensure victims have access within a reasonable time to a competent, independent and impartial tribunal.

In his keynote address during the launch of the Justice For All campaign yesterday, Justice Minister Delroy Chuck expressed his full support for the JFJ’s mission and urged the human rights group to encourage the use of alternative justice services.

There were 2,500 referrals to the restorative justice programme in 2021 and from that number, 2,200 effective agreements were reached.

He said the courts are overwhelmed with cases and when people seek to get justice, “it’s almost an impossible task”.

“The delays create more injustice than justice and the maxim ‘justice delayed is justice denied’ is quite appropriate every day when you go to court because matters are put off not only for months, but for years,” Chuck said.

Chuck also suggested that the JFJ undertake work in the areas of domestic violence and abuse, which are major problems in Jamaica.

“These are the silent victims who don’t come forward. The women [and] the children who are abused regularly by their partners and their parents need the support … . They have nowhere to turn and I say Jamaicans for Justice, not only should you be a mediator with them, but to urge them to go to the Victim Services office,” Chuck said.