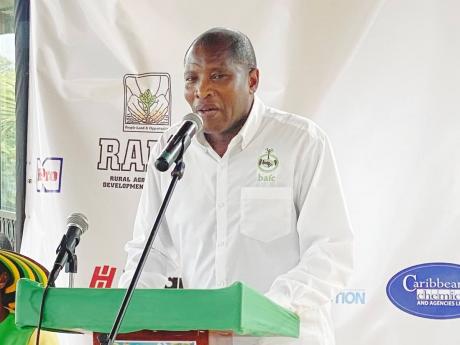 The Bahamas is courting Jamaican farmers and producers to help boost the archipelagic state’s food security, noting that the CARICOM nation imports almost 90 per cent of its food supply. The call was made on Sunday by Leroy Major, executive...

The Bahamas is courting Jamaican farmers and producers to help boost the archipelagic state’s food security, noting that the CARICOM nation imports almost 90 per cent of its food supply.

The call was made on Sunday by Leroy Major, executive chairman of the Bahamas Agricultural & Industrial Corporation.

Approximately 80 per cent of The Bahamas’ annual imports are from the United States, he said.

“In The Bahamas, we import everything that we eat, and we brag and we boast about our great nation, but one thing COVID-19 taught us, that we are very vulnerable as a country, and we have to ‘grow what we eat, and eat what we grow’,” said Major, reprising the slogan promoted by Jamaica’s agriculture ministry.

“... So Jamaica, we ask that you help us. We’re not asking you, we’re begging you, help us. We need to grow our food,” he added in his address during Sunday’s formal ceremony for the 68th Denbigh Agricultural, Industrial and Food Show, the three-day event that ended on Monday.

Major said he was wooed by his general manager to tour the annual farm show in Clarendon. That invitation has piqued his interest in studying the success of horticulture in Jamaica, and Major said that The Bahamas would be looking to forge a partnership with the island’s Ministry of Agriculture, the Rural Agricultural Development Authority, and Agro-Investment Corporation.

“We came to Jamaica because we know that Jamaica is one of the leading nations in the region when it comes to horticulture. Jamaicans, you must be proud of your roots, and so we are like the 12 spies that came and spied the land to see how best we could allow horticulture to grow in The Bahamas ... ,” he said.

Referencing the Russia-Ukraine military conflict and its impact on global supplies, Major called for greater integration among Caribbean countries to improve regional food security. That sort of unity could put the Caribbean in pole position as a trader of produce, he argued.

“One day, they will truly need the Caribbean, and so it is our time now as Caribbean nations to put our resources together, let that brotherly love be shown, let the expertise be experienced [/shared] among ourselves and let us sustain ourselves as a region,” he said.

Major said he was also impressed about the level of engagement of young Jamaicans in the agricultural sector, adding that the passion he saw was testament to the value of farming. He said that a love of the soil was in the DNA of locals.

“I met a young lady in one of the pavilions. Her story touched my heart. She said that ‘we are poor’, [but] she entered this competition and she won two pigs as a prize, but those two pigs are paying her way through college, because they breed.

“She said it takes the stress off her and her mother,” he said.