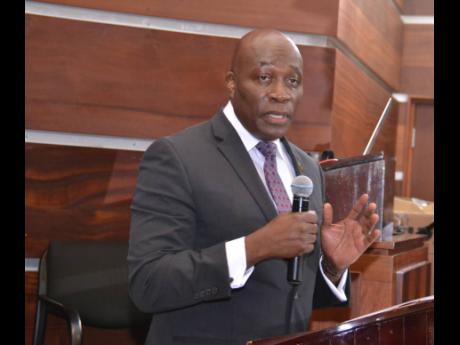 Chief Justice Bryan Sykes yesterday said he envisions a future in which the Court of Appeal is viewed as a “world-class” court.

Noting strides made in recent years to have the court staffed with a full complement of judicial clerks, the refurbishment of court’s building and other notable successes, he stated that this was an indication that the judiciary took the matters of efficiency and timely delivery of judgments very seriously.

However, the island’s judiciary was still contending with two major issues: delays in the production of transcripts of criminal trials in the Supreme Court and Parish Courts and the need for eliminating paper-based documents.

Speaking at a special sitting of the Court of Appeal on Friday to commemorate its 60 years of service, coinciding with the island’s 60th anniversary of Independence today, Sykes said that the matter of acquiring of transcripts is being tackled and will have to be resolved through digitisation.

He spoke of the need for the creation of a new post of transcriptionist for persons tasked with transcribing documents from recorded dictations.

“This is not to say that there is no room for court reporters, but the fact of the matter is that no new court reporter has been added to the cadre of court reporters for about the last decade or so,” Sykes said, adding that retirement would, in the long run, affect operations, unless the nation’s court reporting school is revived.

Court reporters are tasked to prepare daily notes for judges and transcripts of cases which are being appealed.

“Nonetheless, the future of modern judiciaries is digital, and so we have to move in that direction,” the chief justice added.

As such, he noted that software is being deployed in the courts to replace manual systems.

“I won’t say it’s the appropriate software, but it is much better than what we have in the courts,” Sykes said. “In time, the attorneys here present and those listening will be pleased to know that you will be able to find your documents online ... and so it reduces the question of the risk of loss, delayed hearings and other associated matters.”

The Office of the Director of Public Prosecutions is also celebrating its 60th year of existence.

In her remarks, Director of Public Prosecutions Paula Llewellyn expressed the view that she had personally had “some wonderful times” within the Court of Appeal despite the sleepless nights she would have had because of preparations.

“You don’t really learn the law on a micro and granular level until you have appeared in the Court of Appeal,” she said.

Her sentiments were echoed by General Legal Council Chairman Denise Kitson, who described the work of the court as well as past and present judges, registrars, judicial clerks and other support staff as “brilliant and endurable as the diamond which symbolises this anniversary”.

Notable events during the course of the court’s lifetime include a panel of five judges presiding, on more than one occasion, over significant criminal appeals. Among those cases were the 1998 landmark case of Noel Samuda v R, dealing with the constitutionality of a sentence of corporal punishment.

Traditionally, judges would wear black gowns for civil cases and scarlet robes for criminal cases. In 1993, the black gowns were worn for all cases. By 2013, they were replaced by gowns which included all the national colours.

In 2011, judges of the court ceased wearing traditional bench wigs.

• The first female judge of appeal was Justice Marjory Morgan, who was appointed in 1988 and served until her retirement in 1995.

• The first time an all-female panel sat in the court was on May 3, 2010, comprising Justices Harris, Phillips and McIntosh. On January 13. 2014, there were, for the first time, more female than male judges in the court. Males have been in the minority since the cadre of judges was increased from seven in 2019.

• There have been 12 presidents (including the incumbent) of the Court since 1962. They have all been males.

• The court sat in three divisions for the first time in the Hilary term 2019, when it moved to its new location, which boasted three courtrooms.

• On December 9, 2013, the court sat for the first time outside of Kingston.The historic sitting took place at the Resident Magistrates’ Court in Lucea, Hanover.

• The onset of the COVID-19 pandemic in March 2020 forced the court to cease in-person hearings as its standard procedure. Sittings have since had to be conducted on an electronic platform, with the parties and counsel attending the court virtually, while the judges sat in court attended only by court personnel.