Businesswoman on edge as shops firebombed 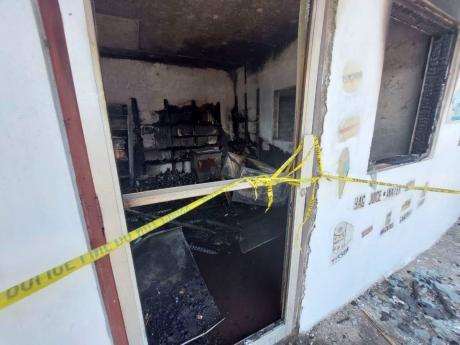 Photo by Asha Wilks
A haberdashery and recording studio on Upper Ivy Road, off Lyndhurst Road, which were firebombed in a predawn attack Sunday.

It was a chilling experience for businesswoman Anika Tate, who was awakened by explosions outside her home Sunday morning. She watched in shock, on a CCTV camera monitor, as unidentified assailants firebombed her establishments. The incident...

It was a chilling experience for businesswoman Anika Tate, who was awakened by explosions outside her home Sunday morning. She watched in shock, on a CCTV camera monitor, as unidentified assailants firebombed her establishments.

The incident occurred some time after 4:30 on Upper Ivy Road in St Andrew.

“I was watching my cameras ‘cause I was hearing the dogs barking, so me say, ‘Hold on, something no right,’ so when I look on the camera, I saw four men come out of the car, broke into the shop, [then] you hear explosion ... . Them light the shop a fire,” she said in a Gleaner interview.

Tate disclosed that while filing a report with the police by phone, a second bottle was thrown into the store, setting off another explosion.

“Tears is in my eye, but I can’t run, I’m just holding the faith because once there is life, there is hope,” Tate said, adding that although she was traumatised, she still remained optimistic.

Tate said that she had no enemies and that no one had ever targeted her businesses in four years of operation.

She said that the recording studio, one of the businesses she owns, along with a haberdashery, has benefited the neighbourhood, offering help and hope to numerous young, aspiring artistes.

Tate, who lives with two sons, aged three and seven, said they also witnessed the shop go up in flames.

“They just say, ‘Mommy, somebody burn down we shop. You a go get we back a new shop?” she said, recalling their query.

She is already lamenting outstanding back-to-school expenditure season, with the new academic year set to commence in September.

The businesswoman estimates that approximately $3 million in merchandise was destroyed by the fire.

“I need help because this is how [I] feed my family, and they burnt everything,” she said.

Several attempts to get a comment from the police and fire department were unsuccessful.