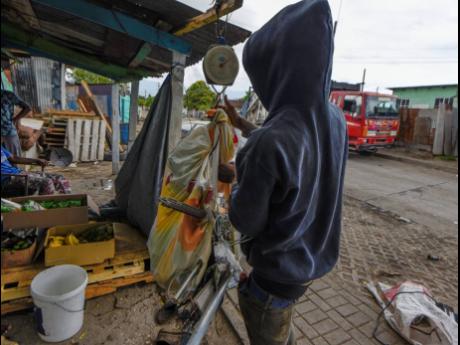 Nicholas Nunes/Photographer
A ‘picker’ weighs metal that he salvaged from the dump in Riverton City, St Andrew, on August 6. Some residents, salvagers, and business interests have expressed opposition to Prime Minister Andrew Holness’ plan to shut down the garbage dump, arguing that it offers an economic lifeline to hundreds. 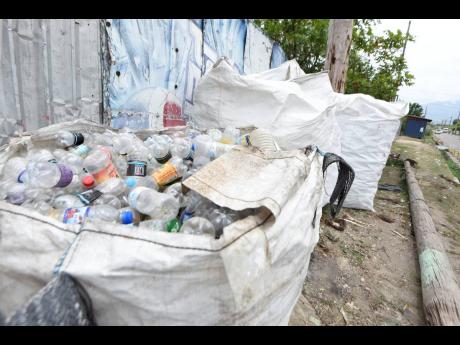 Nicholas Nunes/Photographer
Huge bags filled with bottles collected from the dump in Riverton City, St Andrew, are seen along the road leading to the disposal facility. Sorters and other interests are concerned about the impending closure of the dump.
1
2

Salvaging interests at the Riverton City dump have urged the Government to ramp up training programmes for low-skilled labourers who comb the garbage for recyclables amid fears of an economic fallout when the facility is shut down. Residents are...

Salvaging interests at the Riverton City dump have urged the Government to ramp up training programmes for low-skilled labourers who comb the garbage for recyclables amid fears of an economic fallout when the facility is shut down.

Residents are also wary that their prospects of getting new jobs may be stymied by societal discrimination against persons from that community.

There is fresh anxiety after last Friday’s announcement by Prime Minister Andrew Holness that the Riverton City and other dumps islandwide will be decommissioned.

He made the disclosure during a joint parliamentary sitting but did not give a timeline for the shutdown.

The consensus of residents and garbage truck drivers is that the closure will have a domino effect on the lives of many of the 3,000 people who reside on the fringes of the dump.

Rosemarie left the community she was living in to reside in Riverton 11 years ago primarily because of a lack of economic opportunities.

She recalled facing hunger many days, but her reality changed when she moved to Riverton. It is an oasis for many like her who do not have the basic educational requirements to qualify for a job.

“If dem lock it down, a more crime a go deh here. When di man dem go down go hustle, a dem come support me. Nobody nah lef road come support my shop,” she said in a Gleaner interview.

Twenty-five-year-old Odane Brown, father of four, has lived in the community all his life.

He was 15 when he went to the dump for the first time, and since then, he has been retrieving scrap metal, which he sells by the pound.

“A it make me live. A it feed mi youth dem,” Brown said as he appealed to the Government to reconsider its decision.

The ‘pickers’ are central players in the community’s economic ecosystem, searching, collecting, repairing, and selling to individuals and companies.

Jamaica produces about 1.5 million tonnes of waste annually, the majority of which is domestic.

Riverton receives approximately 60 per cent of all the waste produced in Jamaica, which amounts to 250 truckloads per day, or 1,300 tonnes daily.

Faith, a cook shop operator who has lived in Riverton for 44 years, said that many residents have been unable to secure jobs for decades simply because of their address.

“Without the landfill, many pickney a go sit down on di roadside nah guh school. When a youth go hustle, me can sell a food and somebody can sell a juice. Crime deh ya a go on bad, and if di dump nuh deh ya, it a go worse,” she lamented.

Faith suggested that in the lead-up to the dump’s closure, the Government could offer skills-training opportunities, with a weekly stipend to members of the community.

But she is worried that they may still face employment discrimination because of stigma surrounding their residential address, fearing that enough opportunities may not be available.

Faith shared that plastic bottles are one of the main items on which people rely for income, revealing that the economic benefit spreads far beyond Riverton.

“You have people from Clarendon weh dress up proper and dem go dump go work fi buy food carry home fi dem children. What is the rich man rubbish a our treasure!

“Andrew Holness need fi think twice because a whole heap of people a go be affected,” she told The Gleaner.

Another resident, Shanika Smith, pleaded with the administration to scrap plans to close the dump.

“Unnu a say it a cause health problems and other issues, but when the dump lock down, how my four pickney dem survive? If you close the dump, you haffi go provide jobs fi more than 100 people,” she appealed, adding that earnings financed a range of school expenses for children.

Wayne, a garbage truck driver, is paid a flat rate of $1,400 for each trip to the dump whether refuse was collected in the plains of the Corporate Area or in the hills of Golden Spring, St Andrew.

“My income will be affected if this dump is closed. This is what puts food on my table, and a lot of us have no educational background of substance, so this is our means of living,” he said.

CEO of the Jamaica Environment Trust (JET), Dr Theresa Rodriquez-Moodie, said the dump was not properly designed in the first place.

“We have questions coming out of that statement. While it’s good that we are hearing that the Riverton City dump will be closed, where will the garbage be going? Where is the alternative? I think we should’ve heard all of that at the same time,” she said.

Rodriquez-Moodie added that a well-designed and lined landfill should eliminate some of the issues such as fire risk and accompanying respiratory nuisance Jamaica has faced with Riverton over the years.

Meanwhile, St Andrew Western Member of Parliament Anthony Hylton told The Gleaner that discussions had been taking place on the issue and thathe was in support of the dump’s closure. Holness said he would meet with Hylton for talks in September.

Hylton said the coexistence of the people and the dump has been a challenge not just for residents of Riverton, but for the entire lower St Andrew and much of the Corporate Area.

He noted that critical discussions have to be held prior to the closure of the site and indicated that the people of Riverton City would have to be given the assurance that their livelihood would not “simply be discarded but that specific plans would be put in place around housing and around other kinds of planned development so that the future of the people would be secured”.

In October 2016, businessman Lyttleton ‘Tanny’ Shirley was appointed head of a nine-member enterprise team charged with leading the divestment of the Riverton City dump.

They were tasked with contracting out Jamaica’s waste-disposal service and establishing a waste-to-energy system.

Executive Director of the National Solid Waste Management Authority (NSWMA), Audley Gordon, said the authority supplied a good deal of the information that went into forming the conclusions at which the enterprise team arrived.

Gordon, who is also a member of the enterprise team, added that the NSWMA wants to truly embrace its core role of regulator of Jamaica’s solid- waste industry.

“A high percentage, 90-odd per cent, of what we do is operational. We are the ones taking up the garbage, transporting the garbage and storing it. That was not the intention of the act,” Gordon said in a Gleaner interview.

“The act wanted to have clear separation, where the NSWMA as an authority would be overseeing, regulating, and sanctioning, and that regulatory role is what this process will culminate in.”