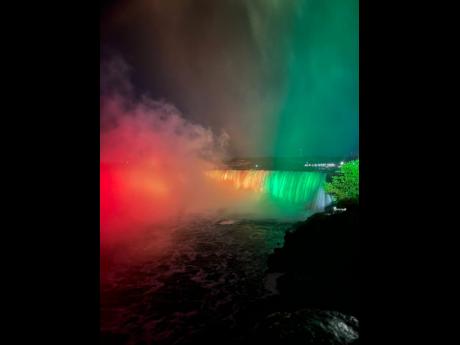 Photo by Roshteque Harrison
Niagara Falls lit in the colours of the Bolivian flag on Saturday night. Jamaicans turned out at the Canadian site to witness the falls in black, green, and gold but left disappointed. August 6 marked the Independence anniversary of both Jamaica and Bolivia.

Jamaican expatriates in Canada who showed up with high hopes of witnessing the fanfare of Niagara Falls being lit in the colours of the island’s national flag on Independence Day said they were left disappointed.

Citing an advertisement that the falls would bear the black, green, and gold between 10 p.m. and 10:15 p.m. Saturday, the Jamaicans were stunned when they saw it lit with red, yellow, and green – the colours of Bolivia.

The South American nation also recognised its independence on the same date.

Scores of Jamaicans decked in national colours not only visited the venue, but booked hotel stays overnight.

While around 30,000 persons gathered at the National Stadium in Kingston to enjoy the Independence Grand Gala Saturday night, so, too, did many Jamaicans turn out 4,873 kilometres away at Niagara Falls.

Roshteque Harrison, a Jamaican native now living in Canada, was among those miffed by the perceived slight.

“The Jamaicans were so disappointed. They didn’t show the Jamaicans colours any at all, so many Jamaicans showed up for foolishness. People take the day off to be there and even booked hotel,” Harrison said in a Gleaner interview.

Describing it as an embarrassment, Harrison was upset that the lighting show featured “Rastaman colours”.

Ralston Chamberlain told The Gleaner that based on a notification from the Jamaican consulate and an announcement at the Jamaica 60 launch in Canada, Jamaicans drove for more than two hours to Niagara Falls for the spectacle.

“The colours were that of Bolivia who celebrated their independence today as well. One Bolivian woman remarked, ‘Is Jamaica celebrating something? Why so many Jamaicans here dressed in the colours of the country?’ From the young to the elderly. Jamaicans of all background,” Chamberlain said.

Rayon, another Jamaican, was among those who took the day off with his family. They had also made hotel reservations.

He described the effort as “a big waste of time and money”.