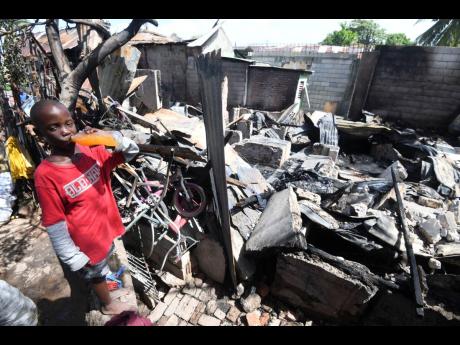 Ricardo Makyn/Chief Photo Editor
A youngster surveys the charred rubble after a massive fire razed several homes between Smith Lane and James Street in central Kingston on Monday. Residents say they were firebombed. 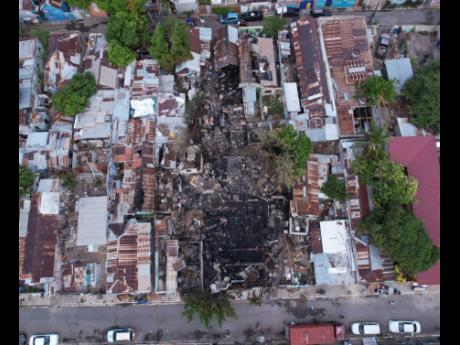 Ricardo Makyn/Chief Photo Editor
The blackened wreckage amid a maze of tenement yards where a massive blaze left 30 people homeless after criminals launched a firebombing and gun attack on central Kingston residents between Smith Lane and James Street on Monday.
1
2

The site of flattened tenement yards, the ground covered in soot, and the despondent faces of shell-shocked residents of Central Kingston stirred the rage of Rae Town division Councillor Rosalie Hamilton.

Days after the patriotic show of the Independence celebrations, the grim reality of chronic violence began to sink in for low-income householders in the capital.

Residents recounted a predawn firebomb attack that ripped through the wood, brick, mortar, and zinc, transforming their homes into a furnace.

Lambert Williams said he and others came under sustained gunfire, forcing them to abandon hopes of salvaging any possessions.

He lost furniture, appliances, and cash, having only the merino and shorts he wore.

Williams said he was rattled as the tragedy unfolded.

“Mi tun fool when mi come out and see the fire,” he said.

Another resident compared the alleged fiery assault to “Armaggedon” – citing the September 3, 2020, election as a trigger that set off a wave of unabated violence in the Kingston Central constituency.

The councillor toured sections of James Street and Smith Lane with first-term Member of Parliament Donovan Williams, who declined to speak with journalists.

“This a breed poverty … . Mi sick of this. A di solution mi want hear bout. What’s going to happen to end all of this. It need fi stop!” she said aloud.

People’s National Party caretaker for Kingston Central, Imani Duncan-Price, visited the community and reiterated her request that the security net be widened to include Spoilers.

Residents like Paula Oxford had to choose between saving property or preserving their lives, as gunmen reportedly fired indiscriminately while they watched sections burn.

Oxford, a mother of five, said all her belongings, including recently purchased back-to-school supplies, have gone up in smoke.

“Not even a panty. My five kids back-to-school bun out,” Oxford said.

Even as Oxford spoke to journalists, her seven-year-old daughter pulled on her shorts, uncertain of the future.

“Mommy, where is my grade two uniform,” the girl said.

Twelve children and eight elderly are among those gravely affected.

The Kingston Central police said they were summoned about 4:45 a.m.

Ira Richards, 84, said Monday’s blaze revived memories of his first house fire on Laws Street in 1970. He cursed his luck having rebuilt his life from the ashes more than half a century ago.

“Bed, fridge, stove, clothes, and furniture mi lose. Couldn’t save nothing because gunshot a fire. From you hear the shot dem, you have to secure yourself,” the frail-looking senior told The Gleaner.

Samantha Wilson, another affected resident, walked throughout the charred premises and showed her family overseas the scale of the devastation via a video call.

The mother of two lost everything – appliances and furniture – and is worried about the immediate academic future for her children.

Nearby Parade Gardens has been under a zone of special operations since January.