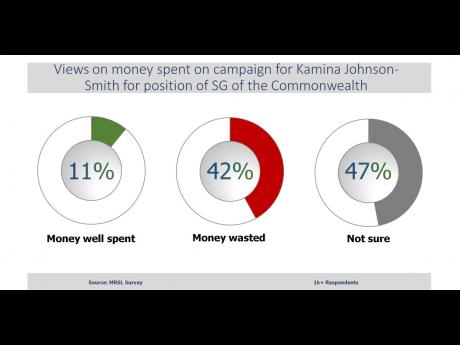 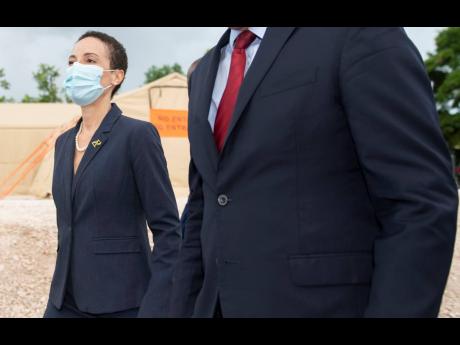 File
Questions are emerging about the unnamed private funders who footed nearly half the $33-million bill for Kamina Johnson Smith's Commonwealth candidature.
1
2

The Jamaican Government is facing mounting pressure from one of the country’s most powerful private-sector groups for full disclosure of the details of funding for Foreign Affairs Minister Kamina Johnson Smith’s failed bid to oust Commonwealth...

The Jamaican Government is facing mounting pressure from one of the country’s most powerful private-sector groups for full disclosure of the details of funding for Foreign Affairs Minister Kamina Johnson Smith’s failed bid to oust Commonwealth Secretary General Baroness Patricia Scotland.

Citing concern about private interests sponsoring nearly half her campaign bill, Jamaica Manufacturers and Exporters Association (JMEA) President John Mahfood has called for the Holness administration to “be very clear” in its justification of the $18.2 million spent pursuing the Commonwealth’s top diplomatic position.

Mahfood said that the country remains in a “tight financial situation” and held that the sum is “significant”.

“... Plus, I believe that it is not appropriate to have the private sector pay for this type of expenditure,” the Jamaican Teas CEO asserted on Monday when contacted by The Gleaner.

The JMEA president slammed the fostering of perceptions of a quid pro quo for “these types of expenses as it makes them beholden to the individual who made the contribution”.

He challenged the Holness administration to shield the State from the risk or perception of influence – “in the same way that government officials should not be travelling in planes of private individuals when on government business, and in the same way that the commissioner of police says that the police should not accept money for repairs to police stations and police vehicles from the private sector”.

Taxpayers covered Jamaica’s $43-million Commonwealth bill, as the Government said it spent a further $25.7 million on its delegation to the heads of government meeting in Kigali, Rwanda, in June. The core campaign bill topped $33 million – inclusive of $15 milion from unnamed Jamaican private funders for public-relations and thought-leadership services from international marketing firm FINN Partners.

An RJRGLEANER Group-commissioned Don Anderson poll published on Monday showed that 42 per cent of Jamaicans believe the expenditure was wasted while 11 per cent think that the funds were well spent.

Forty-seven per cent were unsure.

The findings were culled from nationwide fieldwork conducted between July 16 and 26 and involved interviews among 1,113 people aged 18 and older. That was weeks before the revelation of the Commonwealth bill on August 7.

The poll’s margin of error was plus or minus three per cent.

On Monday, Robert Morgan, minister without portfolio in the Office of the Prime Minister with responsibility for information, maintained that the hiring of FINN Partners “was a separate arrangement that had nothing to do with the Government of Jamaica”.

The Government said that the firm was secured by corporate Jamaica, but Morgan would not divulge the names of the private donors to Johnson Smith’s campaign.

Civil-society advocate Carol Narcisse called the Government’s disclosure of its Commonwealth spend an insult to the intelligence of Jamaicans.

She told The Gleaner the basic standard of accounting for expenditure is a breakdown to include how much was spent and on what, but argued that the Government’s statement did not meet that bar.

“What was budgeted, pre-candidacy, for international trips and meetings of the minister of foreign affairs leading up to, and including the Commonwealth Heads of Government Meeting (CHOGM)? Did this itinerary include visiting seven African countries and how much did this cost?

“How many of the CHOGM delegation were for campaign support and would not normally have otherwise attended? What line items were funds moved from the other ministries, departments, and agencies? In other words, what has the country been made to forgo to make up the $25-million CHOGM budget and why did this become necessary?” Narcisse questioned.

She also called for disclosure on the funders of FINN’s public-relations fees.

“Rather than being a fulfilment of the Government of Jamaica’s commitment to transparency and accountability, the statement is instead a study in obfuscation,” Narcisse said.

The Government said that despite losing, the country garnered significant and widespread international support.

It said that the contacts made and the opportunities to share views and secure understanding on issues of common concern have served to strengthen bilateral relations and further enhance the island’s reputation internationally.

Johnson Smith lost 24-27 to Scotland in an election that also featured Tuvalu’s Sir Iakoba Italeli, who had also joined the race to lead the secretariat of the 54-member Commonwealth of Nations.