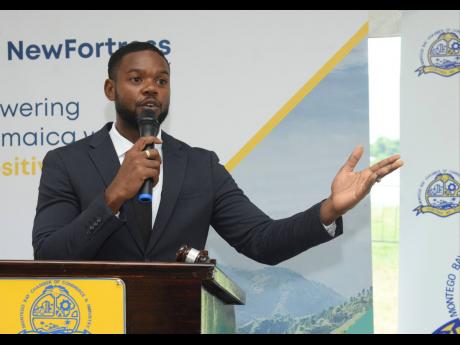 Montego Bay Deputy Mayor Richard Vernon has taken a swipe at Jamaican expatriates who seek greener pastures at the expense of developing their homeland.

Vernon insisted that patriotic youths should stay in Jamaica and build their country.

“Only cowards run away to go to America because they are seeking out opportunity. Opportunities are there overseas, but do not run away and leave your country, especially leaving indefinitely, and you don't want to contribute to the further development of your country,” said Vernon.

“You same ones who are saying that the country is not going on with anything, what are you doing to develop your own country? They made the sacrifice in America and all the First-World countries so they can live the life that you admire, so do the same for your country and your parish.”

The deputy mayor made the remarks Thursday while addressing the New Fortress Energy Foundation's annual back-to-school fair at Pier One in Montego Bay, St James, where 300 students from schools across St James each received $10,000 in vouchers, supplies, medical checks, and tablets.

It is broadly accepted that nearly three million Jamaicans live beyond the island's shores, many of whom keep families back home afloat with remitted funds.

His comments came two days after reports that high teacher migration rates could result in some school curricula being abandoned because of high attrition.

That inducement has increased as American teachers flee the classroom, opening up opportunities for migrants.

The Ministry of Education has indicated that it could lose approximately 1,250 teachers this year, with more than 400 educators having already left Jamaica to pursue more attractive salaries in the United States. It has been estimated that about five per cent of Jamaica's 25,000 teachers leave the profession each year.

Vernon also said that Jamaicans do not need to conform to the subculture of lottery scamming, or otherwise illicit schemes, in order to succeed.

“I see some persons in some little ways endorsing scamming, saying that the Government is not providing enough jobs and so persons have to turn to scamming. You do not need to 'chop the line', and you do not need to scam, because there are other ways out,” said Vernon.

The deputy mayor praised New Fortress for its investment in the back-to-school fair, which he said empowered students to become productive members of society.

Thursday's back-to-school fair, which New Fortress Energy hosted in collaboration with the Montego Bay Chamber of Commerce and Industry, was part of a wider national initiative that benefited 1,000 students across the parishes of St James, St Catherine, and Clarendon, where the company operates its LNG plants.

New Fortress Energy had previously held similar back-to-school fairs in Clarendon on August 9 and in St Catherine on August 10.