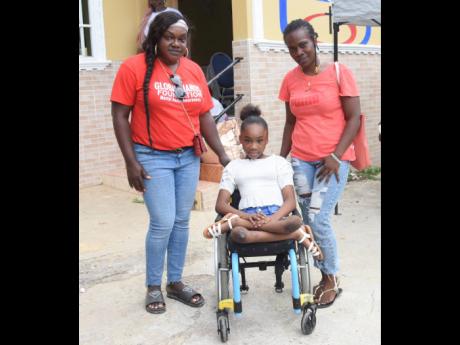 Ashley Anguin/Photographer
Tamara Noble (centre), who lost the ability to walk following a car accident in 2017, poses in her new wheelchair, which she received on Thursday. At right is her mom, Stacy-Ann Reeves-Noble, and Carlene Coates-Russell, the founder of the Global Hands Foundation, is at left. The wheelchair was donated during the foundation’s health fair at the Bounty Hall New Testament Church of God in Bounty Hall, Trelawny.

“I am feeling happy because I know that I am going to walk again.”

Those heart-melting words were uttered with conviction on Thursday by nine-year-old Tamara Noble, moments after being informed that she would be getting assistance to undergo physical therapy to help her regain the use of her legs.

The Cooper’s Pen, Trelawny native lost the ability to walk more than five years ago after sustaining serious injuries in a motor vehicle accident in February 2017.

The promise of paid-for therapy was made less than a minute earlier by Carlene Coates-Russell, the founder of the Global Hands Foundation outreach organisation, who presented Tamara with a brand-new wheelchair during the group’s third annual mental health awareness seminar at the Bounty Hall New Testament Church of God in Bounty Hall, Trelawny.

Besides talking to residents about mental health, members of the Global Hands Foundation also conducted tests for high blood pressure and sexually transmitted infections and distributed various medical supplies, including wheelchairs such as the one given to young Tamara.

“It was five years ago that I saw her in the newspaper, and I reached out to her mom, who told me that Tamara did not have a wheelchair,” said Coates-Russell.

“I brought her this same wheelchair that she is sitting in, but now she has outgrown this wheelchair, so I pledge today that I will have a wheelchair for her before the month is over,” she added. “I am also going to try and help her with physical therapy, and I will be paying for the sessions.”

Stacy-Ann Reeves-Noble, Tamara’s mother, said that at present, her daughter needs a leg brace, which is expected to assist her in regaining some mobility. However, the brace costs approximately $800,000 – money that the family does not have.

“The brace is supposed to be custom-made at a place in Kingston, but they still have it because I do not have the money for it. She is supposed to get the brace to help her get back the strength in her foot,” Reeves-Noble explained, in between subdued bursts of otherwise welled-up emotion.

Despite her sadness at her daughter’s condition, however, Reeves-Noble said she firmly believes her child is destined for greatness despite her present inability to walk.

“She may not be walking now, but she is blessed with other talents. She can walk on her hands, she can stand on her elbows, and she said she wants to go to the gym or to go to the Olympics,” said Reeves-Noble. “I ask God today to help her accomplish her dreams, even as she is in a wheelchair, because He has a plan for her and no devil in hell can stop it.”

As for young Tamara, her near-death experience has given her a greater appreciation for life.

“I feel very happy about getting a wheelchair, but I really also want to stand up on my feet again and walk. I am feeling really happy because I can see that I could have died in the car accident and now I am alive to see this beautiful world,” Tamara said.