Security minister traumatised by the barbarity of crime in Jamaica 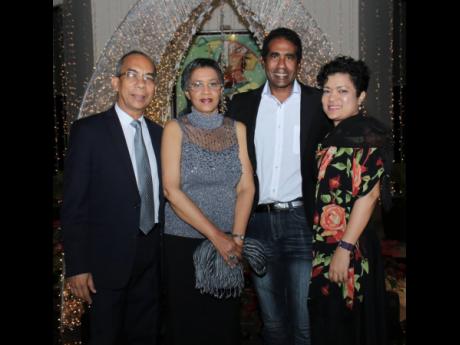 A family man, Dr Horace Chang has been married to Paulette (second left) for more than four decades. Here, they share a moment with daughter Melissa and son-in-law Richard Ferdinand. 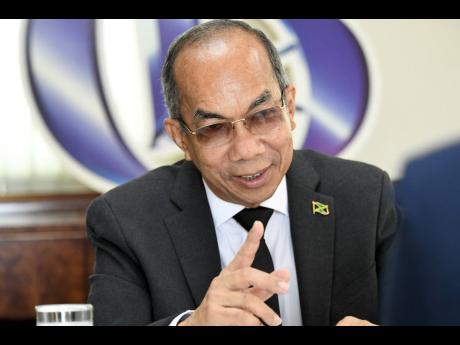 Rudolph Brown
“At my age, it’s not my wish to leave government in a wheelchair; I want to have a life”: Chang. 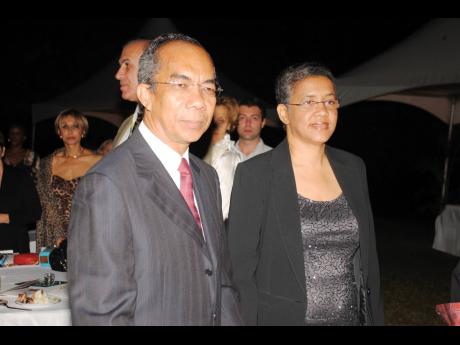 A family man, Dr Horace Chang has been married to Paulette for more than four decades. 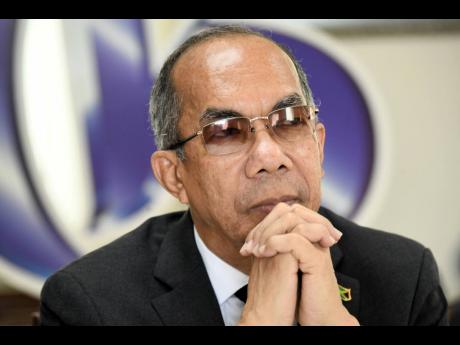 Even a seasoned politician like Dr Horace Anthony Chang goes into shocked silence at the barbarity of some of the crimes committed in Jamaica.

In a recent sit-down with The Sunday Gleaner, he recalled how his body and mind were jolted as details unfolded of the massacre of a family of five in Cocoa Piece, Clarendon, in June.

The night before the news broke, he had retired to bed around midnight after a final briefing with his security chiefs. He was alerted by a call, which made him reach out to Police Commissioner Major General Antony Anderson.

It was news that a young mother and her four children, including a toddler, had been slaughtered.

The trauma sent Chang into silence, and it would not be the only time in that week he reacted that way.

This is part of his coping mechanism in dealing with this aspect of his portfolio as national security minister, trying to rein in a crime crisis that has the nation on edge.

There is no simple solution, he said, as the nation’s crime problem is quite complex.

Chang, who grew up in western Jamaica and learnt to read The Gleaner and the Bible on the insistence of his grandmother, often ponders on Jamaica’s past and what has led to its current state.

A former Cornwall College head boy and president of the Guild of Undergraduates at The University of the West Indies, Mona, Horace Chang received his training as a medical doctor. Now, he mulls over finding the right medication to apply to his national security portfolio to make things better.

Chang confessed that as more details of the Cocoa Piece slaughter were revealed, it became apparent that June 21, 2022 would go down as one of his worst days since he was appointed national security minister. He didn’t know how long his silence lasted or his first words to break it.

His portfolio is one that very few want in any government. Many believe that his appointment as deputy prime minister in September 2020 was a pot sweetener to keep him steering the national security ministry, for which he has been the minister since March 2018, as none among the current crop of government legislators appeared to have the capacity or capability to handle it.

Despite his more than 45 years of experience in politics, for his survival, he cannot take the daily crime reports personal.

WHAT MAKES HIM ANGRY

Chang admitted that he is baffled as to why Jamaicans slaughter each other, even for the minutest of offences.

In his boyhood days, the only things parents feared for their children, irrespective of how long they had to walk, were unsecured cows.

Now at age 69, he does not understand why a nation of such talent, eloquence, excellence, intellect and creativity has such a lust for blood.

“I cuss when I get upset. When things are to be done, especially simple things, and they get put off for some nonsense, I just cuss,” Chang shared with The Sunday Gleaner.

“The Clarendon killing was a bit more traumatic, which made me very angry. But the first thing you do when something like that happens, I don’t freeze; I go silent. I have to spend a little time to digest something like that, somebody murdering a family of five. That’s cold. And at that point, I may use a Jamaican expletive – not in an angry way, in the Jamaican dialect way. When I break out of it, then I call to get the details and begin to look into all that happened and where the police are and all that. But that kind of trauma still shakes you a bit.”

The veteran politician was further rocked by news of the elderly man who cut the throat of his elderly wife shortly after the Clarendon massacre, then reports came of bodies found in a house in St Ann.

Although a man of many hats over the years, nothing prepared him for the job of minister of national security. But Chang believes that any intelligent person can handle any ministry.

For him, violence is a public health issue and this is how medical training comes into play.

He endeavours to get all the information he can, then conducts an analysis of the situation, designs a policy, and hire the best professionals to execute it. That is always his approach, but many Jamaicans question whether it is reaping results.

Getting top-quality people, including permanent secretaries, bring success to any minister, he stated, adding that the current heads of several security bodies under the ministry’s portfolio were among the best in their fields.

GETTING AND KEEPING TALENT

Jamaicans, Chang believes, have a schizophrenic approach to the way crime is viewed, and generally believe that crime-fighting is a police matter only.

“It’s much much broader than that and I have to get that message across. When you focus on the police, too, the attitude is schizophrenic. Everybody you meet in Jamaica knows a good policeman. But when you ask them about the police as a body, the views are negative. It’s a little better now, but that’s the attitude. Because crime, unless it impacts them directly, they see it as a bit distant, and they expect the police to solve it. They never ask, ‘What do you need to solve it?’” argued Chang.

According to him, the police are deemed to have failed when crime reaches individuals who see it as purely police business. And if strong action is taken, the police are viewed as brutal; yet many want them to rid the country of ‘shottas’ (killers).

“But then when the police kill one in this district, the police become a criminal. That’s an attitude which led to what we have in Jamaica. The police were caught in a difficult situation and had very little equipment with which to fight, so we have to play catch-up, in attitude, legislation and tools to fight the criminal network,” he said.

“But we have some good people, we have some excellent people, not just who come and advance their CVs and leave, but I think the current leadership we have is a good crop. The police commissioner and a number of persons around him; the (JDF) chief of staff and her team; the head of the Major Organized Crime and Anti-Corruption Agency, and so on – these are people of high quality who could be in those positions in any country in the region.”

Too many persons, Chang said, view the uniform worn by the Jamaica Constabulary Force as just black pants with red seams and a candy-striped shirt and do not see it for what it represents – an institution and a force for good.

“Policing is a profession, and those who wear the uniform ought to be seen as professionals, similar to doctors and nurses. Many top-quality Jamaicans were and are part of the Constabulary,” said Chang.

“But keeping them is a challenge.”

He admitted that civil servants were not properly paid. Comparing salaries to the private sector, he said those at the top levels were well paid, but those below were similar to the public sector.

“The police recruit is paid better than the bank recruit. You get recruited from university as a bank teller, you are not paid better than a police recruit. It is a low-salary economy, so every opportunity persons get to improve their CV, they move on. I don’t have a quarrel with that; we just have to recruit more. I am saying it’s a low-salary environment and we have to pay the police better to keep those we want to keep,” said the national security minister, admitting that police officers should be better remunerated as their jobs carry a higher risk of personal injury or even death.

The low-salary economy was also negatively impacting legislation, as lawyers and draughtsmen with experience quickly move to where better salaries are offered.

Chang recalls that his first month’s salary as a politician was equivalent to a day’s earnings while he was in full-time medical practice, highlighting the fact that politicians, too, are not well paid.

In 1977, Chang was appointed medical officer of health for the parish of Trelawny, and he, along with a team of doctors, pioneered the development of a modern public health system for Jamaicans. This included the compulsory immunisation of young children and the establishment of Type 1, 2 and 3 clinics in the parish.

He was first elected in 1980 as the member of parliament of Hanover Western, before moving to St James North Western by 2002.

When the Jamaica Labour Party (JLP) won the 2007 general election with a razor-thin majority, it was the first time it was taking the reins of power since 1989. Its general secretary then was Karl Samuda, who would later pass the baton to Chang, who was in the post when the party again tasted victory in 2016 and 2020.

In the 2007-2011 JLP administration, Chang served as minister of housing, environment and water.

Politics, he acknowledged, was hard on families, especially children, and he is adamant that he will not exit the arena in a wheelchair.

“I don’t think I have that much longer left in politics, relatively speaking. But I can’t say I am going to resign tomorrow or when. Because I have become so involved in the current government development and execution programme, I will want to see some things go to a certain stage. But at my age, it’s not my wish to leave government in a wheelchair; I want to have a life,” he told The Sunday Gleaner.

It was always his desire to represent a rural constituency, but that takes a toll, especially when one is a minister, as much time is spent on the road.

He bemoans the fact that many politicians retire after years of service and have to seek help from the system to survive in their winter years.

A family man, Chang has been married to Paulette for more than four decades. He said people were not afraid to be nasty to the families of politicians, and he would discourage his children from entering politics. He believes they should have an established economic base before such considerations. It’s the same advice he also gives to young people wanting to enter politics.

Chang’s greatest contribution to the JLP is his recruits, especially being able to bring more women into politics, who were bright and able to be part of the political process for a long time.

In his downtime, he reads a lot, feeds birds on his back porch, and plays dominoes to relax, he revealed, adding that he does not drink.