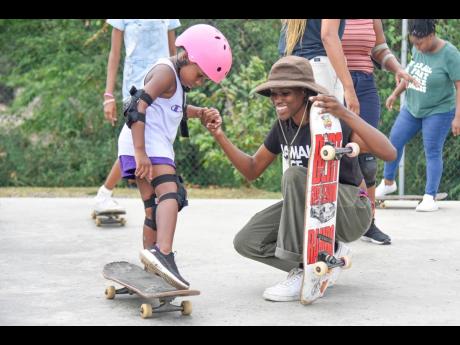 Nicholas Nunes/Photographer
Jamaican skateboarder Kayla Wheeler assists Kharliegh Gayle with perfecting her balance and posture at the skating park in Eight Miles, Bull Bay, on Saturday. The event was aimed at inspiring self-confidence in girls. 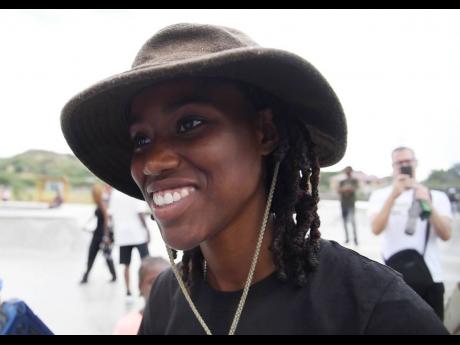 Nicholas Nunes/Photographer
below: Kayla Wheeler: “Hopefully my journey has influenced other young girls to try something that has always been dominated by males.” 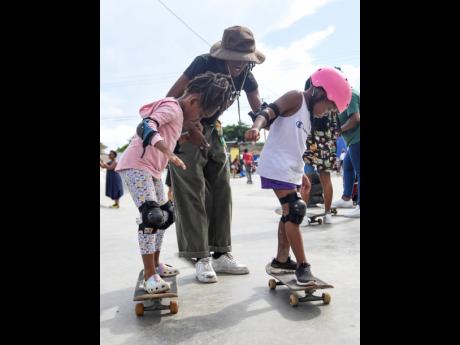 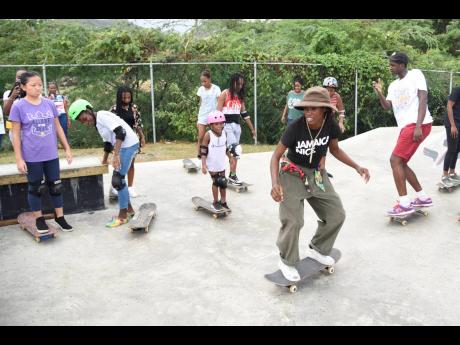 Nicholas Nunes/Photographer
Girls are glued to Kayla Wheeler as she displays skateboarding techniques at practice session.
1
2
3
4

Kayla Wheeler had never watched professional skateboarding before she got involved, but her passion for the sport was piqued after seeing some of her university peers having fun.

After four years of dedication, she is now representing Jamaica internationally in the sport while leveraging skateboarding to inspire girls of all ages.

The evidence of her growing impact was on full display Saturday as Wheeler, 21, attracted 50 young girls and boys to a training session – despite some initial showers – that she almost single-handedly organised.

Wheeler would journey eastward from her home in Spanish Town, St Catherine, to the skating rink at Bull Bay, St Andrew, almost daily to ensure that she never missed practice until she found suitable accommodation close to the park, which made life much easier for her.

“The first time I started skating, I fell in love with it right away. I left home, moved closer to the skate park. During COVID, I was able to live here for some time and be part of the development,” she told The Gleaner.

Growing up with her extended family in a mom-headed household, Wheeler said that her childhood was relatively stable, with one of her two sisters living there along with some cousins.

Despite her “sheltered” early beginnings, Wheeler eventually came out of her shell and became more involved in leadership roles. She was student council president and also participated in the cadet movement.

She credits skateboarding for her metamorphosis from shy girl to change agent. It is a journey of self-identity on which she wants to take other girls.

The sport, she said, helps to instil self-confidence and self-esteem while teaching profound life lessons and building community spirit.

“Skating has helped me to be outspoken and interact with a lot of persons. I have been on a lot of platforms. I have been recognised internationally by pro-skateboarders,” she disclosed.

“Hopefully my journey has influenced other young girls to try something that has always been dominated by males. Hopefully one of them will take it up to represent Jamaica.”

Eleven-year-old Dejane Harvey has been influenced by Wheeler. They met each other a year ago and Dejane was impressed with her skills.

“She is really great. Yes, I aspire to be like her. I want to represent Jamaica in the Olympics, and I am working very hard on that dream,” Dejane said.

Kadia McDonald, who started out just about the same time Wheeler did, lauded her for her focus on the concerns of girls and young women.

“It is so important for young girls to have this space to build our confidence because quite often, the women just get subjected to do household things, so to have a place like this for us is a great possibility,” said McDonald.

Communication specialist Patrice Gilpin, who assisted with the planning of the event, said Wheeler has shown that there are countless possibilities for young girls, who are being emboldened through sport.

“This is what skateboarding does for the young girls, and Kayla has epitomised this more than any other female involved in the sport in Jamaica,” Gilpin told The Gleaner.